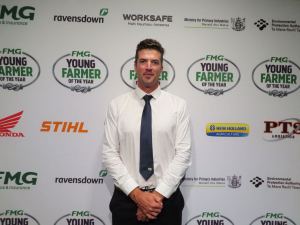 Tim Dangen has secured himself the final spot at the FMG Young Farmer of the Year Grand Final for Season 54.

Danger, a 29-year-old beef farmer and calf rearer in Muriwai, was announced as the winner of the Northern FMG Young Farmer of the Year on Saturday night after a full day of challenges.

Following closely in the runner-up position was Lisa Kendall and in third place, Sam Waugh, both members of Franklin Young Farmers.

Dangen says he was rapt to take the win after putting in a lot of preparation in the lead-up to the event.

“It’s always bugged me a bit coming second in the previous three Regional Finals,” he says. “It’s nice to go one better and the hard work has paid off.”

In the lead-up to the Grand Final in July, Dangen says he will be calling on his support networks to help him prepare, including fellow Grand Finalist and brother-in-law, Chris Poole, who took out the Waikato Bay of Plenty FMG Young Farmer of the Year at the beginning of March.

“It will be a bit of fun, we will try and lean on each other’s strengths and help each other out,” he says.

Upon receiving the award at the evening show, Tim, an Auckland Young Farmers member, was extremely appreciative of the volunteers and committees behind the scenes.

“A huge thanks to the team of sponsors that make it all happen, without you the Contest can’t happen, and it’s such a vital part of the primary industries. It’s great to be out doing something like this with a bunch of great people!” he said.