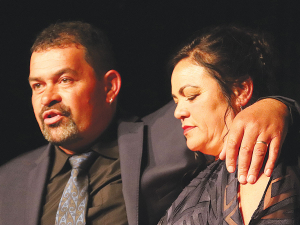 Eugene and Pania King are the second couple in the King whānau to win the trophy. Eugene’s sister Nukuhia and her husband Bart Hadfield won the competition in 2015, and brother Ron and his wife Justine were finalists in 2017.

The hall erupted with cheers and applause at the news and the couple and their whanau walked to the stage to receive the large trophy. A haka was performed on stage.

Emotions were high and tears flowed and the pair were unusually lost for words.

Eugene King says they were rapt to win the award and buzzing with excitement. It all seemed surreal and they needed a few days for it to sink in.

Pania King says they felt humble to be winners of the award, an acknowledgement of the work they and their whanau had done for 18 years, in particular the last six years since they bought Kiriroa Station.

“We are proud tonight of what we have achieved, and proud of our wider whanau,” she told Rural News. “We like to benchmark ourselves and set and achieve goals and think we are performing very well. It’s not just our business, it’s our life.”

Amidst the excitement a pragmatic Eugene pointed out that on Sunday they would be scanning lambs and getting right back to work on the farm.

Sharing in the glory and excitement were the couple’s four sons who did a haka and put their hands on the trophy.

“They were really excited. I looked at their faces when they called out our names and our farm and it was just like when I take the chocolate cake out of the oven,” says Pania.

Earlier in the evening, when the pair were presented with their finalist medals, Eugene King paid tribute to the men who inaugurated the Ahuwhenua Trophy – Lord Bledisloe and Sir Apirana Ngata. He says their foresight to encourage skill and proficiency in Maori farming is evident today in the wider agri sector.

He had words of encouragement for the finalists in the Young Maori Farmer competition, saying they are the future of the industry.

But his final tribute was to his wife Pania.

“You are a wonderful wife – the driving force of a lot of the things we do within our whanau, our business and community. Your passion, commitment and loyalty, your aroha and your hard-nosed approach to things keep me on the straight and narrow. Pania, I love you to the moon and back.”

“Entering Ahuwhenua has been a positive and humbling experience. At times challenging, but it has made us an even stronger team,” she said.