Tackling issues will help to keep farms fit for purpose 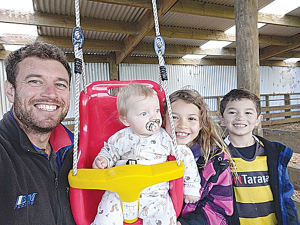 With his new book Tools for the Top Paddock being released on August 3, Kane Brisco talks to Leo Argent about his experiences on farm, the establishment of Farm Fit, and what led him to writing a book about it.

At his lowest ebb, Kane Brisco could barely even look at his stock.

Consumed by a myriad of problems, he'd completely lost confidence in his own abilities and future.

Interacting with other farmers and community members led him to realise that these problems were not unique to him.

To lift himself and others, Brisco set up a workout/wellness group, which he called Farm Fit. A friendly atmosphere and strong social media presence has led to Farm Fit becoming a national hit, with thousands of followers, invitations to speak at events and a new sense of purpose for many involved.

What do you think has led to Farm Fit’s success?

“I think it’s the fact that I’m a real farmer talking about and doing things with fitness that is really relatable, genuine and honest.”

What do you think has been the biggest surprise of Farm Fit?

“Probably its success so far, that people engaged with it as well as they have. For a book to come out of it, I would never have imagined in my wildest dreams I’d accomplish something like that in my life.”

What inspired you to write a book?

“I felt like what I’ve been through in life had a lot of value to give, and to really dive into the stories behind the lessons so people can get a really good understanding of it to digest.”

Did the process of writing help you come to discoveries about yourself that you wouldn’t have come to before?

“It was a really cathartic experience, almost like therapy in a way. I had to think about my thoughts, attitude and my mindset towards things and how I dealt with it, so it was quite a healing journey in a way. I’m a typical rural male, I guess; I don’t often talk about my emotions and to put it into a story that made sense and was relatable, I found it really challenging.”

If there was only one thing that people take away from Tools from the Top Paddock, what would it be?

“Ooh, that’s a hard one… not letting the negatives in life define you into a negative person, so being able to find the positives in the challenge. I think that’s a really important thing to be able to do.”

You weren’t born on a farm; you were a town boy gone rural, so to speak. With farm kids moving into city jobs and little urban-to-farm transition, what do you think the industry should do to change this exodus?

“You’re always going to need to be tough to do it, but we can adapt to that new lifestyle and make it more enjoyable and give people that balance of working hard but playing hard at the same time.”

The Kiwi farmer is a uniquely practical sort.