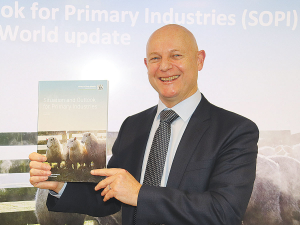 MPI director general Ray Smith says the result is amazing considering that it's come in the middle of the coronavirus pandemic.

For the first time, New Zealand's primary exports, to the end of June 2022, have exceeded the $52 billion mark - a 9% increase on last year's figure.

Ray Smith told Rural News that the result is amazing considering that it's come in the middle of the coronavirus pandemic, with its array of challenges. It is also in spite of the primary sector having to deal with a multitude of adverse weather events in New Zealand.

Smith says this outstanding result can be attributed to the fact that everyone in the primary sector has worked incredibly hard - probably harder than ever before.

But while both dairy and meat and wool are showing huge growth this year, the news is not so good for next year, when both are expected to drop back slightly. Only horticulture will continue to grow and it is forecast to increase by 9% on this year's result.

According to Smith, the volatility in dairy and meat exports is due to fluctuations in world commodity prices and the war in Ukraine, where blocked grain exports will potentially add to the confusion in global food markets. He says the positive news is the ongoing increase in horticulture exports, despite 2021-22 being a challenging season.

"What we see with horticulture is this constant path, whether it is the release of kiwifruit licences for more to be planted or ongoing development in the apple and avocado industry," he told Rural News. "If you look right across that industry group, you are seeing a slow and steady growth path."

However, Ray Smith also sees challenges on the horizon for the sector, with inflation and rising on-farm costs at the forefront of these headwinds.

"The other challenge is getting enough access to labour when people need it.

"We are producing products at such a high volume level now that we do need a good labour supply," he told Rural News.

"Everyone is working really hard to make sure they can maximise that at the right time.

"Employers are having to rethink their strategies, be it investment in technology or looking at new work practices. One of the big supply is not just going through the whole process of recruiting people but retaining them and not have that cost of constantly having to recruit people."

The effects of climate change are another issue confronting the primary sector, Smith adds.

"The whole movement towards sustainability is incredibly important," Smith claims.

"If NZ can be first to reduce methane in pasture-grown animals we will have a competitive adventage over everyone else in the world."

Finally, Smith says - in terms of the logistical woes that NZ has had to deal with - it's hard to tell whether it's gone away or whether we have just got used to it. But he says whatever the answer, it's critical for every exporter to ensure they have allowed for shipping time and are constantly adjusting for the delays.

Key Points From The Report

The primary sector has almost always operated in challenging, changing and volatile times, most of which are beyond its control.

Reading this SOPI report, this is still the case, with the Ukraine conflict adding to the woes of Covid. The report says global commodity prices are soaring due to the Ukraine war, but the negative effect for NZ will be higher fuel and fertiliser prices. It notes that shipping costs are easing but that constraints remain.

As stated earlier, there is a significant section devoted to sector's labour-related issues.

The report does highlight that China is NZ's overall biggest market, taking 37% of our produce, with the USA and Australia down at 10% and 8% respectively. It adds that China takes 41% of our dairy exports and 37% of our meat and 14% of our horitcultural exports.

However, the report predicts the stringent Covid lockdowns in China are likely to slow economic growth in that market - potentially to the detriment of NZ.

In terms of the sheep and beef sector exports for 2021-22, which stand at $12.2 billion, these are predicted to decline over the next two years and not recover to the present level by 2026. Wool exports are also in for a similar roller coaster ride. While dairy prices have remained firm, the actual volume of dairy exports to the end of June 2022 fell by 7%, due to a decrease in milk production.

Only the horticulture sector is showing a consistent upward growth pattern, which will see the value of exports rise from the present $6.7 billion to $8.1 billion by 2026.