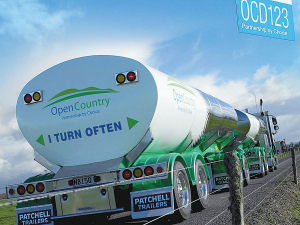 Demand for dairy products remains high in Asia, including China; milk supply in some large producing regions remains under pressure due to weather issues.

In its monthly newsletter to farmer suppliers, OCD chief executive Steve Koekemoer says when the first signs for a hot and dry summer in NZ became visible the company took a conservative approach and slowed sales.

“This allowed us to take advantage of the increasing prices over the last couple of months and led to an exceptionally good result for our January settlement period.

“Our assumption is that the supply/demand dynamics will support higher prices medium term which could bring more upside for the remainder of 2019.”

The company settled its January period milk price (for milk supplied in December and January) for 2019 at $6.49/kgMS.

On the supply front, milk growth has slowed due to trying weather in some large milk producing regions.

The co-op two weeks ago downgraded its milk forecast for the season from 1530 million kgMS to 1510 million kgMS for 2018-19. This is slightly above last season’s collections of 1505 million kgMS, a season also impacted by poor onfarm conditions.

None of our business!

Open Country Dairy (OCD) chairman Laurie Margrain has refused to be dragged into any debate regarding milk processors taking the COVID-19 wage subsidy.