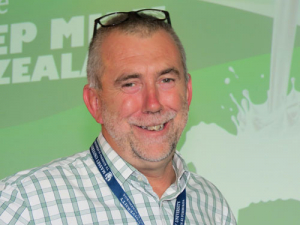 Beyond Massey University’s cheeseboard at Fieldays was the objective of promoting sheep milking.

Associate professor Craig Prichard, a driving force in promoting the new industry, spent all his time at Fieldays handing out samples of an ever-popular smoothie made from sheep milk.

He says Massey is trying to get people used to sheep milk as a food.

“There is an historic gap in New Zealanders’ palette in respect of sheep milk,” Prichard told Rural News. “That’s why we have been doing a smoothie, which is a very popular food.”

And people were able to add their own flavours, which was popular.

Spring Sheep Dairy, which runs a big sheep milking farm in the central North Island, was also on the stand talking to farmers about setting up to milk sheep.

“Sheep dairy is no longer a novelty but we need to build supply now,” Prichard says.  “While we have proven markets, NZ still has only 16 significant sheep milk farmers. This this is just a pimple on the side of the dairy industry and we need to ramp that up.”

He says chefs are excited about sheep milk and how it can be used as an ingredient for other dishes, hence the need to think of sheep milk beyond the cheese board.

NZers are good at eating cheese, but getting cheese into foods and developing it as an ingredient is also important, Prichard says.