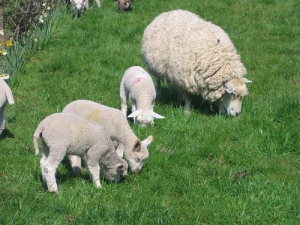 Sheep and beef farmers, especially in the South Island, are going to take a substantial hit in their incomes this year as lamb prices weaken.

Sheep and beef farmers, especially in the South Island, are going to take a substantial hit in their incomes this year as lamb prices weaken.

But Canterbury/Marlborough farmers are facing a drop of 51% to profit before tax of only $42,700. This contrasts starkly with Taranaki/Manawatu farmers' incomes estimated to be $109,500.

BLNZ's chief economist Andrew Burtt says the drop in the South Island is due to the drought and the higher ratio of sheep to cattle. But the overall situation is simply due to weak lamb prices.

Six months ago BLNZ was predicting the average farm profit before tax would be $109,900 for 2015-16. However, Burtt says those predictions were based on better lamb pricing conditions which have not eventuated – hence the $82,400 average.

The report paints a gloomy picture in its prediction that global economic growth will remain at the level of a year ago and that the re-balancing of the Chinese economy will continue. It notes that the value of lamb co-products are expected to fall by 34%, reflecting lower prices for offal and skins.

Overall, sheep revenue drops 10%, reflecting a decrease in the lamb price and number of lambs sold. High inventories in China and more domestic lamb available in the UK (resulting from a lift in UK lamb production and less UK exports to Europe) have depressed NZ frozen lamb export returns this season.

On the beef front the news is a little better. Despite international beef prices being expected to decline this season, a softer $NZ will cushion against a drop in the average return for beef and veal products.

Fewer sheep will mean lower wool production this season, but this will be offset by a 6.5% increase in the price of wool selling at auction.

The complexities of the market, the weather and the exchange rate all come together at the farmgate and here the hard reality sets in. BLNZ has had to adjust its earlier forecast down and is now saying the average price a farmer will get for an 18kg lamb this season is $95 (525 cents/kg).

For beef the options vary, based on what happens to the exchange rate. However, at a rate of $US0.63, the average cattle price would be down 2% on last season.

As the numbers suggest, much uncertainty hangs over the sector, with the state of the Chinese economy a major concern.

• The full report is available on the BLNZ website at: www.beeflambnz.com/economic-reports