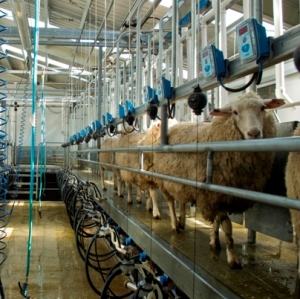 Lincoln University farm management and agribusiness lecturer Guy Trafford is so convinced about the opportunities sheep milk presents he plans to manufacture his own ice cream from it.

He says there are 31 million sheep in New Zealand and with sheep farmers looking for more income sheep milk is a good option.

Trafford uses sheep dairying as an example of an alternative farming system in his teaching and will speak at the first ever conference on the subject next week, which he hopes will help raise the industry's profile.

Trafford also aims to set up a processing plant on his farm with his wife Suzanne, where they are looking to use their expertise to manufacture and market the product.

''We are using ourselves as a case study,'' he says.

According to Trafford, New Zealand is already exporting sheep milk and it is popular in China.

He says sheep dairying has less environmental impact than its bovine equivalent so it is more sustainable, and while currently sheep milk is not as profitable as cows, it is more profitable than meat production.

The milk has a higher solid content than cow's milk and a fuller flavour. It is an alternative system sheep farmers can use, and making products such as ice cream or cheese added value.

Trafford believes New Zealander's attitudes have changed and they are more embracing of new foods, with some common cheeses now made from sheep's milk. He says with just 100 to 200 ewes, he can make ice cream as a high-end product for the domestic and international market.

The Ewe Milk Products and Sheep Dairying Conference is to be held on the 19th February at Massey University. It will bring together a range of businesses and individuals looking to get the industry established nationally. Trafford says there are also plans to form a co-operative, which will help attract a large-scale processor.

Organisations such as Landcorp will be represented at the conference according to Trafford. With their large numbers of sheep, they are looking seriously into the potential of sheep dairying

Trafford sees the potential for establishing a milking flock at Lincoln University and the possibility of the recently announced food testing and production centre, developing products from it.

Stock expansion and management tweaks are on the cards for a couple of Waikato dairy sheep farmers coming to the end of their milking season.

Conference looks at winds of change

More than 130 of Australasia's leading agribusiness professionals are gathering in Wellington today for the annual Platinum Primary Producers (PPP) Conference.

A conference just for the younger generation is one way the deer industry hopes to retain young people in deer farming.

Taking a cue from the dairy industry, Dairy Women’s Network has decided to curtail its next annual conference, at a time when the industry and its members are hurting.

More than 300 delegates from throughout the country have been attending Horticulture New Zealand's annual conference being held in Rotorua.