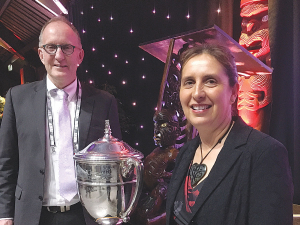 The official competition launch was held at the recent Red Meat Sector Conference dinner, where the trophy was officially welcomed on to the site and displayed to delegates.

The competition is designed to recognise excellence in Māori sheep and beef farming and was initiated in 1933 by Sir Apirana Ngata and the Governor General at the time, Lord Bledisloe.

Chair of the Ahuwhenua Trophy Management Committee, which runs the competition, Nuku Hadfield says the competition offers a unique opportunity for individual Māori farmers, trusts and incorporations to showcase their excellent farming enterprises to both Māori and the wider farming sector.

She says Māori contribute more than 15% of red meat exports and have done much to expand and develop their farming operations - both in terms of sustainability and profitability. Hadfield and her husband Bart are previous winners of the trophy.

She told Rural News that all previous participants in the competition have said it was an invaluable exercise and through the judging process they gained feedback that they otherwise wouldn't have got.

Hadfield says the time and effort in entering the Ahuwhenua Trophy is more than mad up for by the benefits that can accrue - including becoming a finalist and winning the award.

Beef+Lamb New Zealand chair Andrew Morrison says it was very exciting to launch the competition at the Red Meat Sector Conference. He says having the trophy on display to such a large and influential gathering helped raise the profile of the event.

Morrison hopes the profile of the launch will help attract Māori farmers and organisations to enter the Ahuwhenua competition and motivate other companies, who have dealing with Māori farmers, to encourage their clients to enter.

Agriculture Minister Damien O'Connor says it was great to see the trophy in all its splendour displayed at the conference, because it acted as a reminder about the history and the growing importance of Māori agribusiness.

O'Connor says change is becoming more acute and challenging to manage but he believes that farmers always want to do better.

"A competition like Ahuwhenua allows them to analyse and measure themselves against others who are aspired to be the best and that is huge value across the sector," he told Rural News.

The winner will be announced at a gala dinner in Hawke's Bay in May 2022.

Fifty women from NZ’s meat sector came together at last month’s Red Meat Sector Conference to discuss how to support more women into the sector.

Last month's Red Meat Sector Conference was very much orientated to looking to the future - especially in the new pandemic environment.