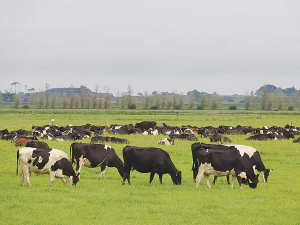 Latest figures released by Statistics NZ show that both the country’s sheep flock and dairy cattle numbers have declined in recent years.

Latest figures released by Statistics NZ show that both our sheep flock and dairy cattle numbers have declined in recent years.

The most recent drop in sheep numbers is blamed on the 2020 drought, which caused feed shortages. Hawke's Bay recorded the largest decrease, with the total number of sheep falling by 12% (346,000) from the previous year to a total of 2.5 million as at June 2020, according to agricultural production statistics manager Ana Krpo.

"While the fall in sheep numbers during this period is related to the 2020 drought, there has been a general decline in the flock for almost 40 years," she adds. "During the past 10 years alone, sheep numbers have fallen by 6.5 million or 20%."

The total value of sheep-meat exports was $4 billion for the year ended June 2020. However, wool export values have plunged dramatically in recent years. In 2012, wool exports were worth $880 million, but that almost halved to just $40 million in 2020.

"Despite a smaller dairy herd, the export volume has remained relatively steady in the past five years," Krpo says. "The annual value of dairy product exports increased to almost $16 billion in 2014 when international prices were high, before falling back to almost $11 billion in 2016, and returning to $16.6 billion for the year ended June 2020.

However, while the nation's dairy herd has declined our beef cattle numbers are up from 2016.

Total beef cattle numbers have steadied in recent time, with little change between the June 2020 beef cattle herd and previous years. Just over two-thirds of all beef cattle are farmed in the North Island.

NZ's total beef exports were worth about $3.8 billion for the year ended June 2020, up from $3.3 billion in year before.

Farmers, foresters and orchardists have just a few days left to complete the official agricultural production census, run by Statistics NZ in partnership with MPI.