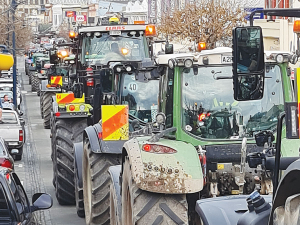 Simon Limmer says recent Groundswell protests showed the deep concern that farmers and the rural community have around environmental objectives of the present Government.

That's the view of Silver Fern Farms (SFF) chief executive Simon Limmer and one of the take-home messages from three virtual roadshows the company recently ran.

During the round of SFF shareholder workshops, farmers were given the opportunity to voice their concerns and Limmer says top of the list was a whole variety of issues around climate change.

He told Rural News the public perception of farming has been challenged in recent years by the new objectives around environmental objectives of the present Government. He says the recent Groundswell protests showed the deep concern that farmers and the rural community have and the uncertainty it is creating.

"Farmers are feeling uncomfortable about that and think there is gap between where the policies are and realities of where farmers are at - and it's a case of closing that gap," Limmer explains.

"Farmers are concerned about the expectations being placed on them and trying to find pragmatic ways of dealing with what they are being confronted with."

Limmer says he's never met a farmer yet who deliberately sets out to damage his or her environment, because ultimately they depend on that environment for their livelihood.

He says the reality is that climate change is going to impact on the primary sector, but farmers are questioning how they can meet the new environmental rules while at the same time focusing on the other government objective of wanting the primary sector to be NZ's economic saviour.

Normally, SFF's shareholder workshops are held at venues around the country where farmers can get to ask company executives and board members what the future holds for their industry. But Covid forced the company to conduct virtual meetings.

Limmer says, in terms of the market in the coming year, things are looking pretty good. Although the caveat on that is a dramatic rise in freight costs, which could impact on farmgate returns. He says there is always debate around what is and isn't 'premium' and what the future might hold.

"We will continue to execute on our strategy to produce quality NZ products that will have a place on consumers plates for a long time to come."

While SFF were busy holding their virtual shareholder meetings, the industry good organisation B+LNZ was working its way around the country - with the exception of regions in Level 3 lockdowns.

Beef+Lamb NZ recently held a series of workshops on climate change - with around 50 held attracting more than 1500 farmers.

Jordan says the workshops are practical and add value to the farming business.

"Farmers need to understand their own 'why' in terms of climate response, so it really means something to them," she told Rural News. "Whether that's because they want to build a more resilient business, understand the implications of future policy on-farm, or whether they want to unlock market opportunities and meet the expectations of consumers."

Jordan says farmers left the workshops knowing their numbers, including carbon sequestration opportunities, and with a written plan that will future-proof their farming business.

She claims what farmers learn in the workshops will help them contribute to the sector's He Waka Eke Noa Primary Sector action partnership milestones. This means by the end of this year, 25% of sheep and beef farmers will know their annual total on-farm emissions and have a written plan to manage their emissions.