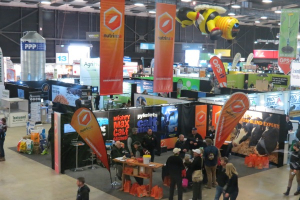 Primary Industries Minister Nathan Guy has congratulated the National Fieldays Society for another successful event at Mystery Creek in Waikato.

133,588 people came through the gates over the course of the Fieldays – this is the biggest number in the history of the four day event.

“This year’s Fieldays was another success thanks to hard work from Peter Nation (Fieldays chief executive) and his team, but also in part due to the positive outlook for the primary sector,” says Guy.

“Many farmers and growers have dealt with some challenging past seasons, so it was great to feel a really positive mood across the many thousands who entered the gates. There’s a strong sense that many will be looking to use their extra forecast revenue to reinvest in their businesses.

“This will have flow on effects for the wider economy, and particularly for all those rural businesses that support the primary sector. That includes those offering direct support services, right through to those who operate general retail businesses in our regions,” says Guy.

The Fieldays event kicked off on Tuesday night with an event celebrating the 1000th Sustainable Farming Fund project, and the launch of the Primary Sector Science Roadmap.

“The Fieldays is the largest agribusiness exhibition in the Southern Hemisphere and is regarded internationally as a world class agribusiness expo,” says Guy.

“There is now a large international delegation, including media, in attendance every year. The benefits of having our premium food, services, and agri-technology showcased and then broadcast around the globe is invaluable.”