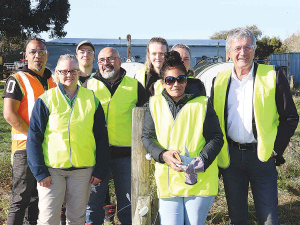 Agriculture Minister Damien O’Connor is pictured with the participants at the first course to held at Taratahi Agriculture Centre, in the Wairarapa, following its reopening earlier this month.

A major recruitment campaign is in full swing to get people displaced by job losses due to Covid-19 into roles in the primary sector.

The Ministry for Primary Industries is leading the charge with a $1.2 million campaign that includes placing advertisements on buses, billboards in towns and cities and a special website that directs people to jobs in different opportunities.

DairyNZ also has its DairyGo campaign up and running and there are many initiatives also underway to encourage people into horticulture as well as to train to drive tractors and large farm machines.

As part of its campaign, MPI is running a series of ‘taster’ or familiarisation courses – where interested people can spend four days seeing the various on-farm job opportunities that are available. These are taking place at farms and training institutes around the country.

As part of this initiative, the Government has assisted in the re-opening of the Taratahi Agriculture Centre in the Wairarapa, which went into liquidation about two-and-a-half years ago. The facility has been re-opened and is being used for the staging of these ‘taster courses’.

Agriculture Minister Damien O’Connor re-opened the centre and then spent time talking with the participants of first course to held at Taratahi. He was also asked to demonstrate his own farming skills by helping to erect an electric fence.

O’Connor says Taratahi’s liquidation left a large gap in agricultural education in this country and it was sad to see it go under. However, he says a lot of hours have been put in by many people to get the centre re-opened and he’s thrilled to see this happen.

“Some sectors have been heavily affected by the closure of our borders, and because of this, we’re working to transition Kiwis without work into primary sector jobs,” he told Rural News. “This also helps farmers and growers cope with the reduction in migrant workers and also helps ensure the sector continues to play a vital role in rebuilding our economy.”

A taste of farming

The four day ‘taster’ course is exactly was it says.

It involves giving those taking part an experience of a whole range of farming tasks – such as fencing, dairying, sheep milking, tractor and quad driving. If the people like what they see they can do other courses such as GoDairy, which has a higher level of skills training.

O’Connor says the training opportunities are part of the Government’s work to place 10,000 New Zealanders in primary sector jobs by rapidly retraining and absorbing displaced workers in sectors impacted by Covid.

The web site Opportunity Grows Here which is part of the MPI initiative had already attracted more than 25,000 hits in its first week.  O’Connor says people can often find it hard to get information about a job, so the new website brings opportunities from across the primary sector together into the one place, making it easier for employers and for job seekers.

“Many unemployed people are talented and have skills that are readily transferrable.

“They just need to know that these opportunities exist – that’s what this campaign is all about.”

O’Connor says job opportunities aren’t just in remote, labour-based roles. He says some are in cities and include work in science, technology, business management, marketing and research.

Living the dream on farm

DairyNZ board candidate Cole Groves says he is “living the dream” as a dairy farmer, milking just over 400 cows near Hinds in Mid-Canterbury.