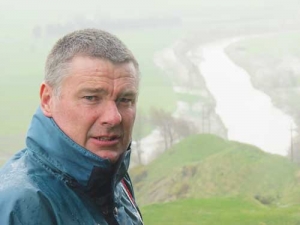 Harry Matthews knows the area well, a key to his being hired to liaise with farmers.

The walls of his Whanganui office -- next to MPI’s – are covered with maps of the region and a whiteboard charts the work programme of the Regional Support Trust (RST).

His day starts here, looking at the latest reports and making calls to farmers. Then he’s out on the road to see for himself and the RST team what is happening. Sometimes he’ll met them at their house but often it’ll be at the side of the road where farmers are repairing damaged fences. Their reactions very, he says.

“Some people have seen it all before and it’s matter of getting on with it. Others have seen nothing like it before and are bewildered by it and it takes them a lot of time to get their head around it. It’s nearly three months since the event and they can’t get on with the fencing and general recovery,” he says.

One such person Harry Matthews touches base with is Nick Tripe (77) who’s farmed in region all his life. He says this year’s floods have damaged the area more than any previous event – including 2004.

Tripe estimates he’s lost 10-15% of his pastures to slip and silt damage.

“This is huge and in my lifetime things will never get back to normal. We’ll have to reduce our stocking rate and I expect it will cost me about $100,000 to replace machinery and the 1100m of fences damaged. That doesn’t include pasture damage.”

Tripe has already oversown some damaged pasture, but his other potential loss is his 7000-tree pear orchard – one of the last remaining in the district. While Taskforce Green people have cleared some of the silt, he cannot get machinery in to spray the orchard.

And as if that wasn’t enough, one house on the farm was burned to the ground a week ago, apparently due to an electrical fault in the newly installed smart meter box.

For farmers like Nick Tripe, the 2015 floods are not going away any time soon. Until the land dries the real impact of this event will not be known. It could be Christmas before this happens. Until then the RST will continue its work.

Around 20 hectares of T&G Global’s mandarin orchards in Northland have transformed to a later-season variety over the past two years – via a dose of kiwi ingenuity and clever grafting.

The apple and pear crop is forecast to increase only modestly this year but it's expected to be top quality.

Fonterra has temporarily shut down its Edgecumbe site, in Bay of Plenty, as a result of flooding.

The end of the year is fast approaching so some end of year thoughts on a few of the significant developments of the year to wrap things up!