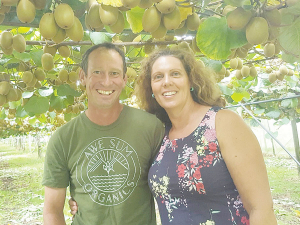 Mark and Catriona White dreams were realised after they decided 12 years ago to grow organic kiwifruit.

While it was deemed to be a good business decision, their main reason was to give their children a taste of living in the country, something they had both experienced growing up on farms.

At the time, White was working for NZ Post and wife Catriona was a school teacher.

“When our oldest child was about to start school, we wrote a list of what we wanted in our life to give her the experiences that we had experienced when we were young,” White told Hort News.

“So that was the pathways back to the land and Opotiki in the eastern Bay of Plenty. My wife’s family offered us land they had been growing kiwifruit on from the late 1970s.”

He says growing organic kiwifruit seemed like a viable business option and it appealed to them. “Because as a family we could work in that business and feel safe producing a product that others can enjoy as much as we can producing it.”

Their block is 13ha, some of it bush. Streams through the property have all been fenced off and they have organic sheep that graze the orchard and keep the weeds down.

White says because theirs was a greenfields development they were able to plant tree species such as Japanese cedar, which reduced the habitat for pests.

“One of the differences is that we work with nature. We believe that everything needs to live and find equilibrium in the environment. We use targeted pest control measures.”

“At the moment, we get a $2.20 premium for SunGold, while the Zespri organic green is sold in a separate pool from ordinary green and those returns are considerably above the conventional price per tray.

“Most of the Zespri organic green goes to Europe and SunGold mostly goes to Asia and Japan.

“There is a lot of demand for organic produce in California where we’ve been twice to study the organic market.”

White says millennials – aka young people – are having an impact on the market. All the statistics show these consumers are demanding more transparent production of their food and want to know more about the process of growing it.

Mark and Catriona White enjoy their business. They do most of the work themselves, and get some help from backpackers who work part time at the peak of the season.

For them, as growers of organic kiwifruit, their dreams have been realised.