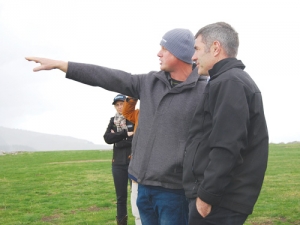 Omihi farmer Nick Hamilton points out the extent of drought damage on his property to Primary Industries Minister Nathan Guy.

The 'medium scale' drought gripping the east coast of the South Island is now officially the longest on record, and this classification is now extended to the end of the year.

"This will mean the area has been in drought for nearly two years, since its initial classification on February 12 last year. This will be the longest a classification of this type has lasted," he said.

Guy says $88,000 extra funding will go to drought recovery coordination and the five rural support trusts along the South Island east coast; $30,000 will go to the North Canterbury trust.

"It's prolonged and has gone on longer than any drought in New Zealand. It's a very unusual set of circumstances here; this community just happens to miss a lot of the rain that's been falling in other parts of the country."

Guy says North Canterbury is the worst affected area, with rainfall only 50-60% of the long-term average. Soil moisture is much lower than normal and some Canterbury wells show groundwater at record low levels.

"This extra funding means a total of $538,000 has been made available by the Government since February last year. As well as extra funding, rural assistance payments will be available for those in real hardship until February 28, 2017."

Guy says Inland Revenue will offer some flexibility on the timing of tax payments.

Local farmers say growth prompted by good rain in January – about 110mm – was burned off by the following two months of drying nor'westers. Although the surrounding hills were tinged with green, the growth was superficial. They say the water table is very low and shelter belts are dying.

Federated Farmers North Canterbury president Lynda Murchison told the Greta Valley meeting she was proud of the way local farmers have prioritised the welfare of their stock.

"There is a good news story -- if there is such a thing about the drought -- that I want us to sing from the rooftops: our stellar animal health record. We have had a 'perfect storm' in animal welfare crisis with the length and severity of this drought. And you have heard [how much] farmers have paid to ensure their livestock are well fed and looked after."

Guy's announcement, ironically on a day of cold southerly showers, was followed by a visit to the farm of Nick Hamilton, just east of the main road at Omihi.

Hamilton pointed out an empty dam and patchy pastures with bare earth which, unless re-sown, could only be counted on to sprout weeds when it rained.

Guy was able to easily scuff the surface with the heel of a gumboot to expose dry dusty soil only a couple of centimetres down.

A Ravensdown agronomist, Dan Pavey, at the meeting had costings for the re-sowing many farmers will have to do when the drought recedes.

Pavey recommended spraying out at an estimated cost of $110/ha, cultivating twice ($500-$700/ha) and light fertilising ($200/ha). Depending on the chosen crop, total costs could then range from as little as $873/ha for summer brassica to $1350/ha for permanent grass with clovers.