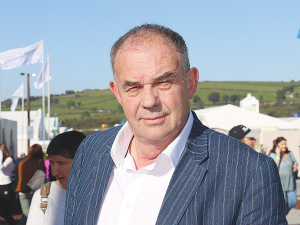 While only 300 people were involved in the actual ploughing, a record 297,000 people were busy browsing the 1700 sites at the event in Fenagh, County Carlow over three days last month.

While most sites were occupied by machinery companies, there was also a strong political presence – much like NZ’s National Fieldays.

The various political parties were busy wooing voters and there was a parade of leading politicians. President Michael D Higgins opened the event and, unlike NZ, the church leaders had a major role in the opening ceremony. A cardinal and two bishops of different churches took 15 minutes to bless the event and the site. They were also credited with being responsible for the best weather ever at the event.

NZ had a strong presence too, with its site acting as a hub for NZ companies exhibiting.

A standout number of sites offered farmers advice and updates on Brexit. Specialist staff were on hand to talk to farmers about potential problems over Brexit.

Observing this was the NZ meat industry’s special envoy on Brexit, Jeff Grant. He says there’s no doubt confusion exists about what the impact will be on October 31 if Britain leaves the EU as planned.

Grant says NZ, like everybody else, is waiting to see if the British Government can find a solution to the Irish backstop or border issue, which is a fundamental problem.

“Brexit is 24/7 in London. Every day the news reminds you of the effect of the impasse of Brexit and this is starting to have an economic and social effect,” he told Rural News.

“While some may see the antics as black humour, this is about the future of this country (UK) and how it trades and for NZ it’s important that we are seen as part of that new trade opportunity.”

While the focus remains on Brexit, Grant says the spotlight is now on the new EU Commission which takes office on November 1 following the EU parliamentary elections which were held in late May. The EU parliament must now get to know and brief new EU MPs so that they understand the issues affecting the NZ red meat sector.

The EU parliament must also know the composition of the agricultural and trade committees likely to play a crucial role in the shape of the NZ/EU Free Trade Agreement.

“The European Parliament is something we have to understand because the EU Commission make recommendations on free trade agreements and they go to the 750 members of the EU parliament,” Grant told Rural News.

“They have to vote in favour of that FTA and we have seen a shift in the EU parliament in the last election, with more Greens and people from the far right sitting in that parliament. It’s going to make it more difficult because the middle ground is not as strong as it was in favouring NZ.”

But Grant says NZ is seen as a good country to do a deal and work with and he is still confident of a positive outcome to a FTA.