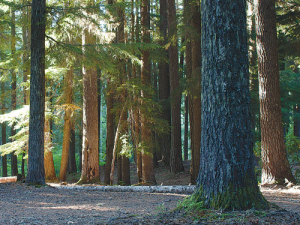 The forestry community doesn’t have an agenda to go out and shoot all livestock and replace them with pine trees, says David Rhodes, chief executive of the NZ Forest Owners’ Association.

Rhodes wanted to assure the farming community and general public of this when he spoke at the Climate Change and Business Conference 2018 in Auckland recently.

He was asked about policy settings to encourage natives rather than just all pine trees.

“In terms of that balance – it is there in the Billion Trees programme as well – you have to have both,” says Rhodes. “When you are dealing with private landowners, asking them to effectively manage a second DOC estate for free isn’t going to cut it. We have to recognise there has to be regional development, there has to be economic employment; but… we need carbon soaked up fast.

“A lot of the native stuff will do that but it will be over a longer period of time. There will be areas of NZ suited to long-standing species with permanent canopy cover. It will have to be a combination of both – pine and natives.”

Rhodes sits on a ministerial advisory group for forestry and finds that everyone talks about the right tree in the right place. However, he says, as soon as you start getting into that, it means different things to different people.

“We need to think long and hard about where we are putting things and why we are putting them there. For example, in the commercial sector there is a bunch of places where we would not want to see radiata established. It will bring us headaches in the future or it will be too far from the market and people getting involved will be disappointed and it will leave a long term legacy that we don’t want.

“It is a matter of establishing the best place then using incentives, [perhaps] grants, and you can vary it so you provide more systems for indigenous.

“The price of a native seedling will be significantly more than for radiata seedlings. There is a public-good argument to say that we should be supporting that, so policies will have to vary.”

Rhodes believes that if the policies are right for the commercial sector, then the carbon price should mean the taxpayer doesn’t have to do too much.

Asked if the Billion Tree programme will make a difference to reaching targets under the Paris Agreement on Climate Change, Rhodes says realism is needed about what you can to expect to achieve in 10 years.

“It will make a difference. The question we have got at the moment is where is the price of carbon going to go? There is uncertainty out there.

“You have two groups of forest owners: first, those who are already in the business and who understand it, who do not plant for capital gain; they are purchasers of land and at the moment it is difficult to make that work. We are struggling to see that planting there but once the carbon goes up that will change.

“The second group is Maori, farmers and Queen St farmers… they have the land. The cost then is significantly reduced -- it comes down to opportunity cost: can that land be used for something else? In which case you will be cautious about where the price of carbon goes because you take the credit and you also take the liability in the future. But if you need cash -- it is going to help you do something else -- then you can profitably use that money elsewhere.”

Farmers are willing to work with the Government on climate change solutions but warn there are no silver bullets.

The results are in - now what?

OPINION: Now voters have had their say, the incoming Government has some important decisions to make about farming in New Zealand.