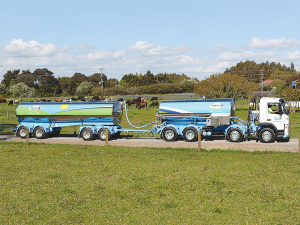 Fonterra has announced a slight downgrade to its farmgate milk price for the season just ended.

Penny notes that the 'spot milk price' since Fonterra's last update in March has been around $9.00/kgMS and sometimes higher.

"We must admit we are puzzled by the downgrade," he says.

However, he says that Fonterra chief executive Miles Hurrell and his team "have done a good job in reasoning it clearly to farmers."

"That is why we have revised our midpoint down 5 cents," he says.

He noted that in an "extraordinary" March Global Dairy Trade (GDT) event, prices jumped 15% and contributed to the increase in Fonterra's forecast milk price.

The average price for whole milk powder was over US$4,350/metric tonne, he noted. However, in the last three GDT events, the average price has reduced to close to US$4,100/MT.

Butter prices have gone from almost US$6,000/MT to below US$5,000/MT for the first time since January.

Penny has a couple of possible explanations for the downgrade. One is that the impact of the rising New Zealand dollar on the milk price has been larger than expected.

The other explanation is that a larger proportion of the milk sold at recent auctions, at very high prices, has been earmarked for next season than analysts had estimated.

"This latter explanation could also help explain why Fonterra has been so bold for the new season," Penny says.

"At this stage, we can only speculate. We still learn more on this front when the milk price statement is released later in the year."

Penny says that on the basis of high spot milk price, their model had estimated a price in the vicinity of $7.90/kgMS.

"This is significantly lower than our forecast - at this late stage of the season, we take this one on the chin and adopt Fonterra's forecast midpoint of $7.55/kgMS."