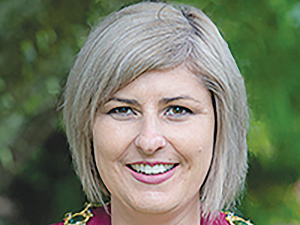 Grey District mayor Tania Gibson is calling on the support of all rural and provincial mayors around New Zealand against the Government’s proposed SNA process.

Grey District's mayor is unhappy at the lack of response from government ministers about concerns from West Coast leaders and iwi on Significant Natural Areas (SNAs).

Tania Gibson is seeking the support of all rural and provincial mayors around New Zealand in the battle to protect landowners from having their land locked up by the Government's proposed SNA process in the new National Policy Statement on Indigenous Biodiversity (NPSIB).

In a letter to her fellow mayors, Gibson lambastes the attitude and response of Environment Minister James Shaw to opposition to the SNA process and the rural sector in general.

She told her fellow rural mayors that Shaw's comments - "It is only a few Pākehā farmers down south whipping this up, spreading misinformation because they have always pushed back against the idea of any kind of regulation of protecting environmental conditions on their land..." have angered and disgusted her.

Gibson asks if this is the view and attitude of central government. She has urged all mayors to write to the relevant government ministers about this "theft by regulation that is eroding our relationships with our ratepayers and forcing large costs on to our councils and our constituents".

Meanwhile, Gibson says the three mayors of the West Coast - Westland, Grey District and Buller as well as the Westland Regional Council chair and its two local Rūnanga chairs Ngāti Waewae and Makaawhio - had written to Shaw opposing the SNA process.

"We have not received a reply of any substance apart from a generic response letter sent saying that once the National Policy Statement on Indigenous Biodiversity (NPSIB) is gazetted, the implementation will focus on supporting councils and basically that the process will be continuing."

Gibson says she has discussed the issue with other mayors from the rural provincial sector and they also are not happy with the SNA implementation and its process.

"I consider Minister Shaw's comments disrespectful and I think he needs to be held to account," she says. "Our letter to the Minister represented owners of a significant portion of land area in the South Island, not just 'few pakeha farmers from down south'. The blatant disregard and way that our rural sectors and primary industries are being treated is appalling."

"They are feeling undervalued and are facing new legislation that is making industry and small businesses harder to function and I know my community is feeling angry and frustrated," she adds. "With government ministers making this type of comment and providing no answers to the questions they are being asked, I can see why."

Gibson says she would have thought Shaw would have been trying to bridge the urban-rural divide.

"However, comments and attitudes like this further widen the gap."

Meanwhile, James Shaw has been invited to visit Southland and meet the farmers he vilified.

MP for Southland Joseph Mooney has extended an invitation to Shaw following his outburst about Groundswell NZ, which he called the organisation "a group of Pākehā farmers from down South who have always pushed back against the idea that they should observe any kind of regulation about what they can do to protect the environmental conditions on their land".

Mooney says if the Green Party co-leader had bothered to visit his electorate and had met with Southland farmers, and seen the extensive and positive environmental work they are doing, he wouldn't have made such a tone-deaf outburst.

"Minister Shaw hasn't bothered to come south, so he hasn't seen the incredible work that our farming community has been doing to look after the environment," Mooney says.

OPINION: Climate Change Minister James Shaw seems to be in two minds whether cow numbers should be reduced in New Zealand to cut emissions.

Federated Farmers are issuing a reminder that price penalties won’t drive down livestock emissions without affordable and practical new technologies being available to farmers.

Pressure from government ministers is effectively forcing the He Waka Eke Noa (HWEN) nationwide farmer consultation to go ahead.