Marlborough maintains its title as home of NZ garlic 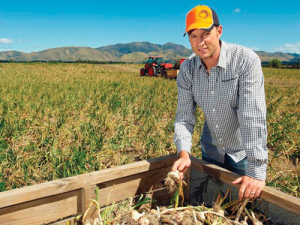 There was a time 20 years ago when the aroma of garlic was what Marlburians woke up to during the months of January and February.

The unmistakable tang permeated the air, as the country’s largest garlic producing region harvested its crops. Those days may be long gone, due to the ever-growing onslaught of vineyards taking over garlic paddocks, but Marlborough still maintains its market share.

John Murphy, chief executive of Marlborough Garlic (one of two major producers in the region) says there is no way they can compete against the US and China in volume, but they can excel in quality.

Interestingly, given Marlborough’s renown for wine, it is the brix (sugar level) of the garlic grown here that sets it apart from that grown elsewhere, he explains.

You may not think of garlic as sweet, but to put it in perspective, a ripe sauvignon blanc grape would contain about 23 brix. A ripe garlic clove, ready for picking would hit the 40 brix level – something almost impossible to achieve elsewhere in the world.

What is it about Marlborough that allows this? Murphy says it’s hard to tell, but it’s likely to be the same influences that impact on grapes – sunshine, rainfall, GDD and soil.

Marlborough Garlic has 80ha of garlic under production and harvests close to 7 tonnes/ha. That, Murphy says, is considered a reasonable yield worldwide, even if it is well below the 10 – 12tph grown in some other countries. The smaller yield goes into premium products -- fresh, dehydrated, crushed or peeled.

“It doesn’t matter which product the garlic ends up in, it is all grown and treated in the same way -- as a premium product,” he tells Hort News.

But perhaps the most intriguing garlic product to come out of Marlborough Garlic’s factory is Garlic Noir – or Black Garlic.

No, it isn’t grown in darker soils and it is not a different form of bulb; instead it is normal garlic that is slow roasted (or fermented as some would say) for weeks on end. Six weeks, in fact.

Marlborough Garlic has three massive ovens that hold 218 roasting dishes each. Each dish is filled with garlic that is broken and peeled, prior to spending those long weeks roasting away slowly. The slow cooking triggers the Maillard reaction, which like caramelisation is a form of non-enzymatic browning. The process takes away the astringency of garlic as we know it, and the pungent aroma.

The end product is often compared to a dried fruit -- smoky, sweet and slightly chewy. And believe it or not, it is a perfect match for cheese and chocolate -- not a food match you probably would have considered with normal garlic.

“Probably the most important thing about this,” Murphy says, “is that there are no ingredients other than fresh Marlborough garlic -- nothing at all, yet you are left with this intriguing product that sits somewhere between sweet and savoury.”

But as with all new products, consumer acceptance takes time.

“Consumer research we have done shows that its biggest attribute is its mystique.

“And its biggest problem is its mystique, in that people don’t quite know what it is, but they are absolutely intrigued by it,” he told Hort News.

The new product is a diversification by the company, which Murphy says is vital if they want to stay ahead of the pack.