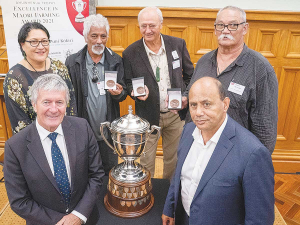 Agriculture Minister Damien O’Connor says the Māori business sector is unrecognised, underappreciated and its potential is only now just starting to be known.

O’Connor made his comments when announcing this year’s finalists in the prestigious Ahuwhenua Trophy competition for the top dairy farm at Parliament recently.

More than 100 people, including three cabinet ministers, Māori dignitaries, agribusiness leaders, government officials and past winners of the trophy were present.

Each of the finalists were presented with a special medal, which recognises their achievement of becoming finalists in the competition.

Pouarua Farms. The farm is located near the township of Ngatea on the Hauraki Plains, close to Thames. The 2,200ha platform comprises 10 farms – nine dairy units and one drystock unit – and is the largest single dairy platform in the Hauraki region.

Tataiwhetu Trust. This property is located in the Ruatoki Valley south of Whakatane. A total of 4,600 cows are milked across 1,775ha and produce approximately 1.65M kgMS. It runs 432 kiwi cross cows and carries 188 replacement stock on its two support blocks. Tataiwhetu is an organic dairy farm milking once-a-day and the herd produces 129,140 kgMS.

Tunapahore B2A Incorporation. The farm consists of 376ha located at Hawai and Torere on the famous State Highway 35, on the East Coast of the North Island. The nearest main town is Opotiki. The milking platform is 132ha, with 385 cows producing 125,940 kgMS.

Representatives of the three finalists were flown to Wellington especially for the function, which was held in Parliament Building’s historic Grand Hall.

It was a chance for the finalists and others to mingle and the speeches were punctuated by waiata provided by the MPI kapa haka group.

O’Connor told the gathering that the official statistics underline the potential of Maori’s participation in the agri-business sector.

He told the finalists they were shining examples of the long-standing commitment of Māori farmers to farm sustainably, developing their whenua and te taiao – the land and the environment – for future generations. He says they are at the top of their game, providing the inspiration to others to get out and do even better to grow the country.

“Being here today is no mean feat and you and your whanau should be very proud,” O’Connor told the finalists. “You are leaders in the entire primary sector and people will look to you in the future.

“Our industry does depend on leadership to be successful internationally and when we look for leaders, we will look to the finalists in the Ahuwhenua competition.”

O’Connor says a number of people in Māoridom have lifted Māori agribusiness into vertical integration and producing high value products, and there needs to be more of that. He says MPI has schemes to help, and that Maori farmers and enterprises should take advantage of that to help further the dreams of their people.

He says all the sectors represented in the Ahuwhenua Trophy competition are really important to the NZ economy and the country.O’Connor says in the Covid environment it should be noted that the agribusiness sector has been able to absorb thousands of workers who have been displaced.

“The fact we have been able to milk cows, process meat and pick fruit is a huge credit to all the sector,” he says.

Ahuwhenua Trophy Management Committee – which organises the competition – chair Kingi Smiler says, once again, there are three outstanding finalists in this year’s competition.

“This is despite the fact that the country and the world is living in challenging and uncertain times,” he says. “Farmers, and Māori in particular, have come through adversity in the past and will do so again.”

Smiler says he is full of praise and proud of Māori farmers for entering the competition this year and showing the determination to showcase their very successful enterprises.

“This is in the true spirit and legacy of Sir Apirana Ngata and Lord Bledisloe.”

Māori Development Minister Willie Jackson, who is also an Ahuwhenua Trustee, says the rise of Māori agribusiness is impressive, especially given its unstinting commitment to all aspects of sustainability.

He says people are seeing great developments in all productive sectors and a trend of Māori playing an increasingly significant role in producing higher value food and fibre products.

Jackson says last year’s horticultural awards dinner was the first such occasion he had attended and says what he saw encapsulated the spirit of the event and celebrated the success that Māori are achieving.

“Māori are diversifying into new areas including kiwifruit and the focus this year is dairy, and for Māori ,dairy is big business,” Jackson says.

“Māori dairy farmers own an estimated 100 million shares in Fonterra, with some of the major players in the sector being large incorporations. Despite the challenges from Covid, Māori-owned farms are strong because we have got kaitiakitanga and this is more relevant than ever.”

Jackson says, as the Minister of Maori Development, his role is to ensure that Maori land owners fulfil their aspirations for their whenua and to improve the sustainability of their land.

He says Maori success is success for all New Zealanders and it’s a pity that many media don’t understand and value the awards.

“Ahuwhenua is one of the most important kaupapa for Maori, but it’s still a bit of secret,” he says.