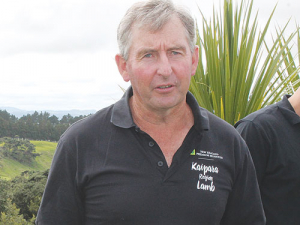 National Lamb Day should be in spring and as high profile as the annual Bluff oyster launch, a Helensville field day heard.

The current National Lamb Day is on February 15 and marks the date the first shipment of mutton left Port Chalmers, Otago, for London.

Ballance award winner Richard Kidd wants it shifted to November and made a high profile event. All the supermarkets would launch lamb with a promotion like they do for Bluff oysters or Beaujolais wine.

“Have the mint sauce there and accompany it with a nice bottle of wine; do the job property and really promote it,” says Kidd, a Helensville sheep and beef farmer.

“We are losing a generation [for lamb] just as we have lost a generation of people who don’t buy wool carpets. The industry is a disaster. If we are not careful people won’t choose to buy lamb.

“We’ve got to promote the product more because we only sell 5% of our red meat to our local consumers in New Zealand. Imagine if we lifted that up a bit.

“Lamb is a pink meat. It should be a showcase product that we produce in NZ.”

The Kidds were prime instigators of the Kaipara Lamb initiative in Countdown.

Kidd says he has long been a supplier of beef and lamb to Countdown and a couple of years ago they asked what they could do for the farmers.

“I said ‘why can’t we market our own lamb brand through you guys?’ ” Kidd explains.

“The points of difference: we have five or six farmers around here who all have early season lambs and we are close to the abattoir in Otahuhu.

“Our spring lambs leave here at 7.30am off their mothers and they are ready to be processed at 11am.”

Kidds get a lot of positive feedback on the taste of the lamb. “I put it down to their coming off the paddock, into the wool shed, processed quickly and they don’t suffer any stress.”

They have their own packaging and Countdown did six different cuts: a carvery leg (a smaller leg with the bone taken out except for the knuckle), loins, French racks with no skin or fat on -- very appealing, the forequarter boned out into a butterfly and trimmed, standard loin chops and leg steaks.

The first year Countdown wanted 250 lambs a week, this last season it doubled to 500.

With 180 stores Countdown has excellent distribution but the lamb is only stocked stores in more affluent areas where customers are prepared to pay a bit more.

Countdown can use the trim for sausages whereas restaurants and speciality stores only want the special cuts.

They are paid a “bit of a premium” but they would like to increase that. They supply continuously from mid-October to mid-February.

Kidd still would like to see more of a story put around the product and more promotion.

He and Dianne went to the flagship Ponsonby store on the two Saturdays prior to Christmas.

Diced lamb steak was being cooked and they took it around the store. Many people said “we haven’t eaten lamb for such a long time” or “that tastes good”.

People asked where it was grown and when they were told Helensville they said “that’s local, we will buy that”.

“Once they tasted it they bought it. Of course there was a huge spike in sales those days, but you can’t be in every shop all the time.”