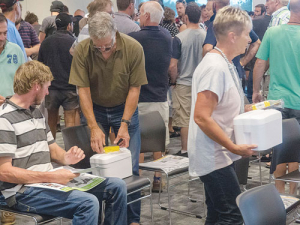 Dairy farmers collect their individualised milk sampling packs at the start of the first nationwide Mycoplasma bovis testing programme. This time farmers do not have to take samples themselves.

The discovery of Mycoplasma bovis on a sheep and beef property near Motueka was entirely predictable, said Agriculture Minister Damien O’Connor.

The farm is in his electorate of West Coast Tasman.

O’Connor says the M. bovis situation is what they expected – more cases being identified.

“While we are still finding new cases they are all connected by one strain, and as long as that’s the case we can still eradicate the disease,” he says.

“We know this disease is spread by contact between animals and movement of stock, as is the case here.

“An obvious question will be ‘why has it taken this long to find this property?’

“The answer to that lies in the nature of this particular bacteria. It is a tricky thing to find and often hides within an animal, lying dormant and not revealing itself for weeks or months. This is why we test multiple times using multiple kinds of tests,” she says.

Duthie says the discovery of more infected properties is not because the disease is now spreading beyond infected farms. She says all known-infected farms, or farms they suspect may be positive, are in quarantine lockdown and risk goods including animals are not allowed off them.

Meanwhile O’Connor says the setting up of a large technical advisory group to assist MPI deal with M. bovis is to ensure they the best possible advice.

“We are all the time seeking the most up-to-date knowledge from international experts and are assessing the situation.”

O’Connor says the first of the bulk milk tests to find other cases of M. bovis have now begun. Six test samples will be taken from every farm and the final results will be known by November.