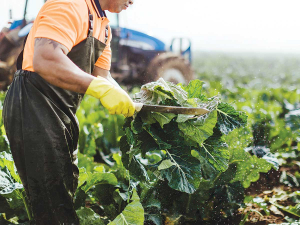 Overall the NZ economy has performed more strongly than anticipated, according to the ANZ Agri Focus Report.

It says consumer spending has helped keep the economy afloat. The report also notes that global shipping costs may have peaked, but it could be another 18 months before these stabilise. It also warns about escalating compliance costs both in NZ and globally, which will impact the sector.

The report says the horticultural sector is heading for trouble due to labour shortages. It says the situation will be worse this season than last season; the lack of backpackers, who normally make up 25% of the labour force in the sector, is a particular problem. It points to Zespri’s claims that it will be 6500 workers short – 2500 more than last year.

The report also signals another concern about the inexperience of new workers and says labour shortages may also impact on the quality of the fruit picked.

Last season it was estimated that only 80% of NZ’s apple crop was picked and there are hints that it could be a bumper year for fruit of all kinds.

The sheep and beef sector outlook is promising, with all the usual caveats such as labour shortages in some processing plants. It says the lamb kill has been slower than normal, due to poor pasture growing conditions which hurt feed quality, hence fewer lambs were ready for the works. Despite this, it says international prices for lamb are expected to remain firm due to supply issues and high demand from China. ANZ is predicting record average farmgate prices for lamb.

International beef prices remain firm, says the report, with the US price for beef close to the high levels of 2019 when both China and the US were bidding for our product. It notes farmgate prices in NZ are high, partly due to limited throughput at the works.

As for the deer sector, ANZ Agri Focus says returns at the farmgate were not as low as expected and that demand for frozen product remains robust in our major export markets.

Who'll replace the backpackers? That's the dilemma facing the kiwifruit industry this season, which is looking at a shortage of 6,500 workers.

Too little, too late?

Young Kiwis wanting to replace the traditional overseas experience with vintage in wine country will receive a warm welcome this autumn.

Zespri is ringing in major changes in its systems to deal with an expected shortfall of 6500 workers to pick this season's kiwifruit crop.