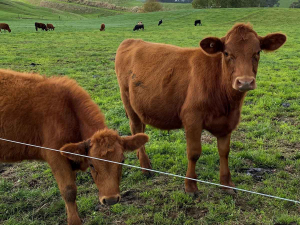 The yellow fat in jersey meat is the result of naturally higher levels of carotene and vitamin D.

Steven & Nina Ireland who milk 500 Jersey cows at Temuka, Canterbury have been trialing various beef breeds over their Jersey herd for 3 years. They slaughtered their first line of Jersey-Angus heifers and steers recently at 26 months and averaged $1,700 each.

“While the Jersey-cross typically has a lower carcass weight than other dairy beef crosses, this is easily compensated for by the additional return due to the superior meat quality,” says Steven.

Of the Ireland’s line of Jersey-Angus, 65% reached the elite EQ standard on the Silver Fern Farms added value system compared to the average of 31%.

Murray & Helen Jagger are also advocates of Jersey beef. The Jaggers farm 650 Jersey cows at Whangarei Heads, Northland, and run a Jersey beef operation as a sideline on a neighbouring property.

Murray and Helen artificially inseminate the bottom percentage of their herd to Angus which ensures replacements are kept from the best cows, while providing a Jersey-Angus cross calf from the remaining animals.

“We select bulls for calving ease, low birth weights, and good 600-day growth rates. We’re aiming to grow animals out at two and a half years old,” says Murray.

The Jaggers rear around 60 Jersey-Angus steers and the same number of heifers annually, and quit a third in November, another third in January, and the final group in March.

“The earliest group range from 260-290kgs carcass weight, with the final group between 300-320kg. There is a perception that Jersey-beef animals are harder to get up to finishing weight but the key is using quality beef bulls with strong EBVs.”

“We’ve found that for our grazing system the Jersey-Angus stock coming out of winter fatten more rapidly. Their growth rates hum in spring and we can winter more per hectare,” says Murray.

In the Waikato, Warren & Louise Berry milk 800 Jersey animals at Parawera. Warren and Louise have been experimenting with various beef breeds to find the best animals for different situations.

“It’s about finding the right breed for your market. A Jersey-Belgian Blue cross is an easy calving, fast finishing animal ideal for the commodity market. Whereas a Jersey-Angus cross has a longer finishing period but produces a tender, highly marbled, premium meat.”

The take-home message, says Watson, is that Jersey Beef is a profitable option for the dairy beef market.

“What Jersey’s lack in size they easily make up for in meat quality as far as taste and tenderness goes, and should be considered a viable option in any dairy beef operation.”

NZ beef on show in Beijing