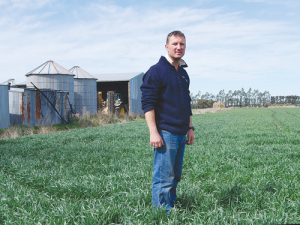 In February he had claimed a yield of 16.7t/ha from that season’s harvest, edging out the current world record of 16.52t/ha.

“I’ve got confirmation we’re well and truly above the record,” he told Rural News.

However, he still cannot claim the official record because it was not registered and monitored as an official attempt.

“They changed the rules a couple of years ago so now you have to advise them of the paddock you’re going for and who your advisors are and so forth, prior to sowing the crop – which is a bit ridiculous, to be honest, because at any time you don’t know which paddock will yield the best.”

Previously, all that was needed was that the harvesting and weighing be attested by, say, a Justice of the Peace, he says.

“To get the world record back for NZ would be a big job now,” says Birkett.

He has not registered anything for the current season.

Birkett, chairman of the Foundation for Arable Research, farms a third-generation family farm of 180ha. He runs about a dozen crops on a five year rotation, including wheat, barley, peas and beans, clover and grass seeds for the local market, and vegetable seeds mainly for export.

His record-breaking crop of last season was Oakley wheat, a feed variety, which tends to be lower-protein but higher yielding than milling varieties. Most of it went as feed to local chicken farms.

Birkett says there was no secret to the record-breaking crop, just good management. “If you do the basics well you’re 90% there.”

This season’s crop is “looking pretty good,” he says, having just finished tillering at growth stage 31-32. It was sown in mid-April.

Birkett believes a long time in the ground is important for high yields.

He irrigates from wells and says Leeston, close to the coast, is lucky to have a high water table. However, the groundwater level is now very low for this time of year.

“We’d normally be about 1.5m coming out of winter and we’re currently at 3.5m. We got down to 5m this year, which is the lowest we’ve ever seen.”