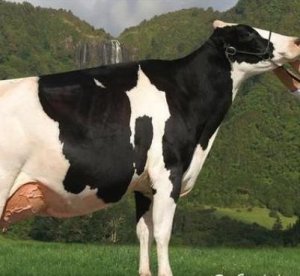 On a farm just out of Te Awamutu, there is an immense rivalry going on. The purpose of the rivalry is to be identified as the best Holstein Friesian 2-year-old in a group of heifers that have been genomically identified as genetically superior.

A team of 34 in-milk two-year-old Holstein Friesian heifers, from around New Zealand, were identified last year as having very good or very interesting genetics to join the 2011-12 Discovery Project, a Holstein Friesian New Zealand initiative and sponsored by LIC. The heifers were genomically screened by LIC as yearlings and genomic breeding values were added to their information as part of the selection process.

Wendy Harker, chairperson of Discovery Project, says this was the first time females were genomically screened outside of normal information gathering for breeding companies.

"It was a great opportunity to have the heifers screened," she said, "Genomics made it easier to identify the top genetics in the group of animals on offer."

The heifers are being milked on the farm of Robin & Pixie Moss, managed by Douwe & Yvette Ykema, in a herd of 600 cows. They were brought onto the property in June and, since calving, have been regularly tested for weight and condition score, herd tested as well as inspected for type and conformation.

"This is a great opportunity for breeders to compare their heifers against the best," Harker says. With one of her own heifers in the Discovery Project team, Harker appreciates the profile that has been raised for her Te Awamutu dairying operation through the programme. Her heifer, Westell Lebon Gypsy GP84, is having a good season and it looks like she will be near the top of the group.

Now dairy farmers and all interested parties are invited to see the heifers and hear how they have proceeded through the season on Wednesday, March 21 on the farm. At the Discovery Project Open Day there will be a range of speakers as well as the opportunity to view the heifers.

Discovery Project measures heifers entering their first lactation based on their milk production, through eight herd tests, being regularly weighed and condition scored throughout the season and assessed on type and conformation.

The heifers are run in a herd and at no time are they given any preferential treatment to the other cows in the herd. During the year, some heifers (identified as a bull dam by LIC or an owner taking advantage of the service) are flushed to produce embryos to produce bulls or to breed the cow family further. Animal Breeding Services (ABS) of Rukuhia provides the service.

Consumers are flocking back to dairy products as Covid shines the light on health and wellness, says Tom Bailey, the new senior vice president for Southern Pastures.

Too busy to herd test in October

Cambridge dairy farmer and breeder Brad Payne would herd test ten times a year, but he works as an LIC AB Technician during October so reluctantly sacrifices data he’d get during that month of the year.

Farmer cooperative LIC has delivered a solid half-year result with revenue up 4% to $170 million.