Harvest goes up in smoke! 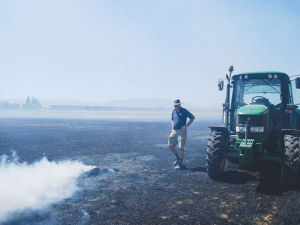 High summer in Canterbury is a busy time, with crops ripening for harvest.

At Sheffield, dryland cropping farmer Stuart Wright was last week burning off the stubble from a 6ha barley field harvested about two weeks ago.

Meanwhile, his combine harvester was working nearby on a large field of blue peas.

Wright sings the praises of burning-off as a quick and efficient way of preparing the land for its winter cover. The burn leaves it ready for nearly immediate light cultivation and sowing – in this case probably grass for winter lambs.

On a sunny but not hot north-easterly day, smoke plumes on the horizon showed that some of Wright’s neighbours were also taking advantage of the conditions.

Dragging a rake through the stubble quickly spread the flames around the perimeter. Once the middle caught, the whole burn was over in minutes.

Wright says burning-off is safe “as long as you follow the basics and burn when conditions are right. As a rule you never burn in a nor’wester because the humidity’s so much lower and the wind strength could be stronger.”

It’s also good for crop hygiene. Wright says prolonged fire restrictions last season prevented burning-off and as a result he had a crop which suffered “terrible” Argentine stem weevil and had to be re-drilled.

“One huge fire risk is gone. That’s the other thing – we’re getting rid of the fire risk.”

The plants were standing up well and the combine was “not leaving a thing,” said Wright. “It’s really good.”

He expected a yield of up to 50 tonnes of the high-protein blue peas, destined for stock food. The pea straw would be baled for the home gardener market.

Wright, the current Potatoes NZ chairman, also grows several varieties of mainly seed potatoes. His potato harvest is due to start in about a month.

Meanwhile, a big change is coming to the farm in the form of irrigation via the Central Plains Water Ltd’s Sheffield scheme. Physically separate from CPWL’s main scheme on the plains, and taking water from the Waimakariri and Kowai Rivers, the Sheffield scheme is expected to be operational by next summer. Wright says it will enhance his cropping operation and he does not intend to convert to dairy.

New Zealand's potato sector remains a billion dollar plus industry despite a year of crises.

The New Zealand potato Industry remains a billion dollar plus industry, despite the challenges brought about in 2020.

DairyNZ is encouraging Canterbury farmers to look out for each other and access support agencies for assistance amid flooding in the region.