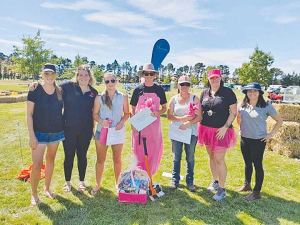 A rural skills competition for women which debuted last year is coming, bigger and better, to the South Island Agricultural Field Days at Kirwee.

The Country Women Competition is the brainchild of the Dairy Women’s Network, which first rolled it out at the Amuri A&P Show at Rotheram, North Canterbury, in March last year.

DWN volunteer regional leader Bex Green organised the original event as “a series of challenges that give rural women a chance to prove their mettle and demonstrate their talent in the farming sector.”

Organiser of the Kirwee event, DWN volunteer regional leader Jourdain Adams, says the first content was a great success, but on a reasonably small scale. So, they’re promising to make a much bigger splash at Kirwee.

“There’s no better [venue] than the field days, so we’ve been very kindly donated a site by the field days team – a very large site, which is cool,” she says.

“We’ve just grown the idea from there and it’s going to be great.”

Adams says the event will include challenges such as milking Daisy the fake cow, backing a trailer, a haybale run and, potentially, some fencing.

The full programme was still being finalised when Adams spoke to Rural News a few weeks out from the event.

An age limit has to apply for health and safety reasons, but Adams hopes “anyone from far and wide” will enter.

“We would love people who aren’t necessarily from the country to come and have a go,” she says.

“Just because of the title it doesn’t mean you need to be a hard-out farmer or anything like that. It would be good to get a few townies involved.”

The competition will be run in two sessions, 10am and 2pm, on each of the three days, with a daily winner decided by the fastest time.

“We’ve got some awesome sponsorship and some really fun weekends-away prizes, vouchers, hampers – so we’ve got some excellent prizes up for grabs.”

Adams is confident the event will be a success and hopes the format will take off nationally.

“It’s the Canterbury regional leaders for Dairy Women’s Network who are organising this event, but it would be great to see it at other shows throughout the country,” she told Rural News.

“We’ve got regional leaders all over the country, right from Southland to Northland, so it’ll be really cool if they could grab our idea and maybe use it at other field days or A&P shows.”

The 2021 Fonterra Dairy Woman of the Year says that her passion lies in mentoring other people within the industry.

After celebrating its 70th year last month, it looks like the South Island Agricultural Field Days (SIAFD) has hit its heights - with most exhibitors spoken to considering it to now be the 'best' field day of any sort in the country.

Two women working at the grassroots of the dairy industry have been announced as finalists for the second annual Dairy Women's Network Regional Leader of the Year award.

The three finalists for 2021 Fonterra Dairy Woman of the Year award have been named.