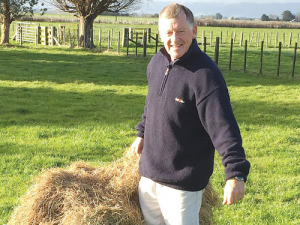 He retired recently from Massey University after a distinguished career and international recognition of his research. Peter Burke reports.

Mike Hedley grew up on a dairy farm in Norfolk, UK, and, as he put it, took the advice of his father -- do something other than milk cows. That turned out to be a degree in biochemistry at the University of Leeds.

As well as loving science, the young Hedley was a keen rugby player, and when he finished his BSc (Hons) degree he seized an opportunity to do a PhD at Massey University.

“New Zealand was a tempting place to come for a young rugby player in 1975. I did my PhD on phosphorus run-off with Professor Keith Syers, the foundation professor of the department of soil science at the university,” he told Rural News.

“In those days, Massey had 20-plus rugby teams. For one year I played at first five eight for the senior A team while the famous Bob Burgess was overseas.”

Hedley played one game for a Manawatu pre-season squad against the junior All Blacks where he was up against Bill Osborne.

“I wasn’t the greatest tackler and he ran right through me several times,” he concedes.

While Hedley didn’t gain high honours on the rugby field, he met his match off the field -- his wife-to-be Carolyn. She had come to NZ and Massey University to do a masters degree, also in soil science. When they had completed their degrees they went to Canada where Mike did post-doctoral studies.

“I worked on wheat soils and developed a method  of phosphorus analysis for which I am famous in the soil science world – the ‘Hedley P Fractionation’. I then went back to the UK and to Oxford University to do another a post-doctoral degree, this time on phosphorus availability in root zones.

“There I worked with Bob White who went on to become a professor at Massey after Keith Syers left,” he says.

“The research at Oxford won us the 1983 International Phosphate Institute Agronomy Prize.”

Despite opportunities on offer in the UK, the Hedleys returned to NZ and Massey in 1983 because they liked the place and had great friendships to return to. They stayed, with Mike becoming the director of the fertiliser and lime centre in 1998. During the lead-up to this appointment he researched rock phosphate and the development of new fertilisers.

In 1992, Hedley and his family took eight months leave to work in the Philippines at the International Rice Research Centre near Manila.

“This research involved trying to identify rice cultivars that could take up phosphate efficiently,” he explains. “They needed methods that could show how rice was actually taking up the phosphorus. My ‘fractionation’ tool proved to be the solution.”

A career highlight for Mike Hedley has been the creation of professional courses on nutrient management, and the annual Fertiliser and Lime Research Centre Workshop run at Massey since 1987.

“This is a good melting pot. Our FLRC team have brought great international speakers to this event and it’s well supported by scientists and rural professionals in NZ and its fun,” he says. “Everybody enjoys that event and gets good value out of it; it works well and we are proud of it.”

Retirement for Hedley, aged nearly 66, will see him spending time on his small farm where he runs steers and a small breeding flock of sheep. But he still has a few projects at Massey.