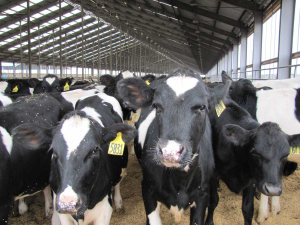 Calves at a Fonterra farm in China.

While Fonterra’s operations haven’t been impacted, the co-op is wary.

A spokesperson says if there was a sustained drop in consumption in China, like fewer people eating in restaurants, then that could have an impact on sales.

“We’ll be watching GDT results and our Foodservice business over the coming month to get an indication,” she says.

Chinese officials have confirmed over 7,700 cases of the mysterious illness as foreign governments, including New Zealand, are airlifting their citizens out of Wuhan, the outbreak’s epicenter.

Some parts of China including Wuhan have movement restrictions in place.

China is Fonterra’s key market: it has a $4billion revenue business there and now accounted for 40% of dairy imports into mainland China.

Around 11% of all dairy consumption in China comes from Fonterra. The co-op has 1700 employees in Greater China.

Fonterra says it has extended the Chinese New Year holiday for its employees, in line with the Chinese government’s decision.

“We have also tracked and contacted all employees who have been travelling over the New Year period and they are safe and well.

“As a precaution, we have restricted work-related travel to and from China and we’re asking employees who have recently returned from China to self-isolate for a period of 14 days.”