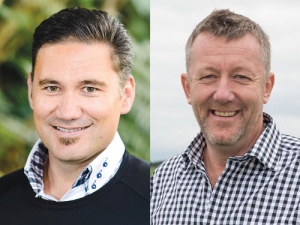 Two unsuccessful candidates in the recent Fonterra director election will get another chance to join the board.

John Nicholls and Jamie Tuuta will face off in a second election called this month by the Fonterra shareholders council.

The first election saw only two of the five candidates secure the minimum 50% ‘yes’ vote needed among shareholders, leaving one vacancy on the 11-member board.

The council decided to open the second election only to the three unsuccessful candidates.

However, former Fonterra director Ashley Waugh, who also missed out in the first election, decided not to stand again.

“I decided not to contest; I have full respect for the shareholders’ decision,” Waugh told Rural News.

Voting for the second board election opened on December 3; Fonterra shareholders have until 1pm on December 20 to cast their votes. Results will be announced later the same day.

Council chairman Duncan Coull says the rules of the first election state that if not enough candidates obtain more than 50% support there must be a second election.

“This is the first time a second director election has been required,” Coull says.

“After careful consideration, the shareholders council has determined that the second election will be a vote between the unsuccessful candidates nominated in the first election who wish to re-stand.”

As with the first election, a successful candidate must obtain more than 50% support from shareholders who vote.

Coull says if both candidates get more than 50% support then the candidate with the highest level of support will be elected.

“If no candidate gets more than 50% support there will not be a third election and the board may exercise its constitutional power to make a temporary appointment until the 2019 annual meeting is completed.”

However, it cannot appoint one of the unsuccessful candidates.

Coull says new candidates will have the opportunity to put themselves forward next year as part of the 2019 director election cycle.

In the first election, Leonie Guiney and Peter McBride secured more than 50% support from voting shareholders.

Three sitting directors retired by rotation; former chairman John Wilson stepped down from the board. Another sitting director, Nicola Shadbolt, was not endorsed by the independent selection panel.  Waugh also contested and lost the first election despite being nominated by the board.

McBride was also favoured by Fonterra’s appointment panel, however Guiney was nominated by farmers.

Like McBride, Tuuta – a Maori agribusiness leader – was nominated by the Fonterra board, while John Nicholls – a large-scale farmer – nominated himself.