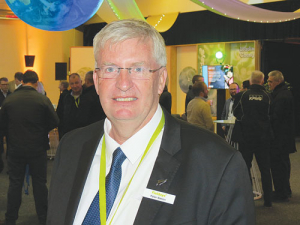 National Fieldays this year stepped up to a new level, with people who’ve long known the event saying it was among the best of recent times.

Early indications suggested crowd numbers were up, and the quality of sites was better than in recent years.

Fieldays chief executive Peter Nation says it’s another step up. A walk around the sites showed exhibitors’ spending had increased substantially and their sites’ look and feel had improved.

“This time last year we were standing here with a three ($3) in front of the dairy payout and I was being questioned about gate numbers,” he told Rural News.

“Ironically, at this time last year we had our second-largest gate, which points up that our event is not just relying on dairy, it’s relying on the whole primary sector and of course urban people are also in reasonable shape and incomes are quite good.”

Nation says Fieldays is not only recognised nationally but also internationally and ranks among the top ten agricultural events in the world -- not bad for an event founded 49 years ago by six farmers, led by John Kneebone with his vision for Fieldays.

“One of its objectives then was to bring town and country together and bridge the divide; this applies equally today,” he says.

Westpac’s head of agribusiness, Mark Stead, believes this year there was a sigh of relief right across Fieldays; people were far more optimistic and positive than a year ago. Had the dairy payout not been lifted, Fieldays would have been very different, he claims.

Stead observes that not only is the dairy sector performing better; horticulture and forestry are also doing well.

Some dairy farmers are making a real effort to pay off debt incurred in the past two years, to regain equity they lost during the downturn.

And they are learning to deal with volatility caused by Brexit and Trump and other ongoing geopolitical issues.