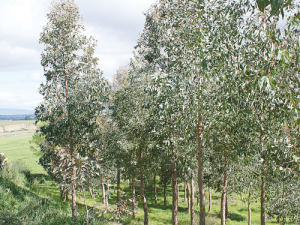 More farm planting. These trees are eucalypts, which are used for extra timber strength, quality paper and some species showing lots of potential for durable posts.

If farmers want to offset their emissions under the likely Emissions Trading Scheme (ETS), then it is rational to plant forestry and get the carbon credits for that, says Farm Foresters Association president Neil Cullen.

Parts of some farms still remain in gorse or are steep unproductive country, he told Rural News.

The scope of afforestation proposed to get New Zealand to carbon neutrality by 2050 is huge. Cullen says the forest companies don’t have the spare land and are reluctant to buy it at the current prices.

“Farm Forestry would like to see farmers planting parts of their own farms – the less productive parts – in trees. That would be the ideal and having a patchwork mosaic of forestry and farming integrated. In the real world, some farmers don’t want to plant trees or they are not keen on trees so there will be farms sold to companies and the whole lot planted.”

There is an opportunity for farmers to plant less-productive areas as many farm foresters have around the country, he says.

Cullen believes farmers should start looking at it now.

“The changes to the ETS are probably still 18 months away. They are talking 2020 when the new provisions for averaging and counting harvested wood products come in, which would make it more attractive for farmers.

There will be less risk involved because you wouldn’t have to repay any credits at harvest and you would also be getting credited for the wood that is lasting longer in things like furniture or housing, so you get more credits.

“If the (carbon) price goes up to $75 – which the Productivity Commission is suggesting it needs to go to – then it is going to be a substantial income. It doesn’t even need to be a forest that will be harvested; it could just be regenerating native forest on ground that is bare now.”

He says every farm situation is different. It would pay to get advice from a consultant or someone with forestry knowledge on what to plant.

“If you are looking at planting in a remote area where roading is a bit expensive to put in then you are possibly looking at an indigenous forest or even something like redwoods that wouldn’t need harvesting for a long time.

If there is native seed source around, the native bush will start growing underneath it. If the pine trees eventually fall down you would end up with an indigenous forest. The ETS should be able to allow for that as the new changes come in. You would be credited for that ongoing uptake of CO2.”

Cullen suggests the North Island hill country will be the main areas. “There would be more like blanket planting I would imagine in some places, but there are still opportunities for farmers or through syndicates to take part in that investment as well.”

Inquiries are growing. “Farmers are starting to realise they will probably end up in the ETS and they might as well make use of the ETS to their advantage. There are people looking at it.”