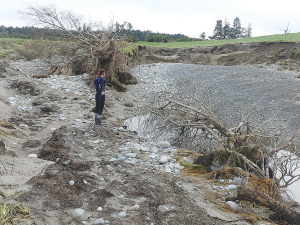 Lisa Milligan in a gully scoured out of the farm, which she and her mother Karen have only recently taken over.

A Wesport mother and daughter team, who only recently bought a small dairy farm bordering the Buller River, are just one of many still struggling to get back on their feet after the huge flood of mid-July.

Lisa Milligan and her mother Karen took on the 70-hectare property about 5km upstream from the town on June 1. One July 17, almost the entire farm was flooded, with water covering the pastures, running through the milking shed and other buildings and lapping around the house.

Milligan says they knew when they bought the farm that a couple of low areas got water through them when the river flooded, "but not 99% of the farm. It was massive."

She told Rural News the flood was at levels no one in the district had ever seen.

The water receded to leave pasture covered in silt, and fences and water troughs ripped out.

On a lower terrace, close to the river, are two deep gullies scoured out by rushing water, which Milligan jokingly calls "A couple of new great big water features."

Joking aside, she believes the gullies can only be fenced off for long term planting - making for a substantial and apparently permanent loss of about 12 hectares of usable pasture. The remaining pasture is full of an unpalatable gritty silt, which means cows will only eat the tops.

The day Rural News visited the farm it was with West Coast Rural Trust chair Carol Keoghan and Greymouth-based PGG Wrightson technical field representative Jennifer Mathieson, who has been seconded to an advisory group that includes PGGW, the RST, MPI, Dairy NZ and Westland Milk Products.

Mathieson says it's her job as co-ordinator to match up offers of help with those who need it.

"Last week, we came here and a pasture walk was completed," she explained. "We've just taken stock of the feed they've currently got on hand, and we now will put those two things together, identify the gap and then we've got the resources to plug the gap with whatever feed they need over calving."

The next focus was fencing, with a contractor lined up, and general clean-up with workers employed through Task Force Green.

Mathieson says the advisory group was working with about 12 farms. Some were in need of feed, and others had feed but were more concerned with damaged pasture and infrastructure.

"Feeding cows at calving has been the most important thing, and then getting [pasture] back," she told Rural News. "We can't sow any more grass until the spring anyway, but we're just getting the mess tidied up."

The Milligans suffered no stock losses, despite calving starting at the height of the flood. Lisa Milligan explained that they moved the herd onto straw laid on a race as the flood waters rose. The first calf was dropped on the straw about midday on the Saturday, when the flood was at its peak.

While the water went through th milking shed it did not reach any machinery and they are now successfully milking again.

"Compared with the huge catchment and the number of farms on the river it's incredible that more stock wasn't lost," Mathieson says. "It was a credit to the farmers that they got them away and obviously that no [human] lives were lost."

Flood-affected farmers in the South Island are being encouraged to make use of livestock feed support services funded by the Ministry for Primary Industries (MPI).

Two higher river terraces have been "the saving grace" of the Hamilton family dairy farm which borders the floodprone Buller River, says the matriarch of the family, 75-year-old Joan Hamilton.

Talk to Westport folk about the big flood of mid-July and all agree it was worse than the historic flood of 1926.

Flood-affected farmers in the South Island are being encouraged to make use of livestock feed support services funded by the Ministry for Primary Industries (MPI).

Buller Mayor Jamie Cleine says the district's recovery from the massive flood, which tore through Westport and surrounding farmland, will be long and complex.