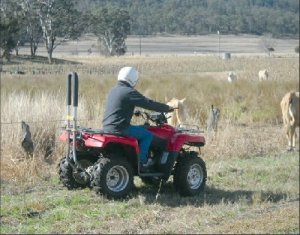 While the number of agricultural deaths has fallen from 19 in 2010 to 15 in 2011, Federated Farmers is committed to bring it down still further.

"Any death is a tragedy and it's much worse when it happens at a place of work that is also their home," says Federated Farmers health and safety spokesperson David Rose.

"Federated Farmers is committed to working with the Department of Labour, with ACC and with the Coroner to make our members take health and safety seriously. I myself have been fronting a campaign to highlight the causes of farm accidents.

"While one year doesn't make for a trend we are pleased to see four fewer deaths recorded in 2011. Yet it is the age profile where there has been marked change."

Federated Farmers is heartened that the safety message seems to be getting through to younger farmers. Last year, Federated Farmers launched a health and safety manual specifically designed to be relevant on-farm.

This is now being used by hundreds of our members, says Rose.

"While we've seemingly made a step forward there, we're concerned that those over the age of 50 could be taking a, 'do as I say, not as I do' approach to safety.

"This is further shown by occupational quad bike fatalities on-farm. There were five workplace deaths involving quad bikes in 2010 with four involving those over 50. Of the four quad bike deaths in 2011, all four involved farmers aged over 50.

"Certainly, it's something we'll be discussing with the Department of Labour and with ACC because we need these farmers to realise their luck will eventually run out.

"In terms of quad bikes we were pleased to see an increase in sales. This reflects farmers positively investing in modern kit and better designed machines.

"In 2012, Federated Farmers focus will be on additional safety features, such as an audible reversing alarm made standard on all new quad bikes. We plan to start discussions with manufacturers shortly on that and other concepts."