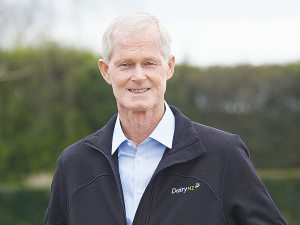 Released by the Primary Sector Climate Action Partnership – He Waka Eke Noa the discussion document is to be considered by farmers over the next three months.

Option one is based on a farm-level levy and option is around a processor-level hybrid levy.

“It’s critical we grab this opportunity and develop a credible alternative framework as the Government has already legislated to put agriculture into the NZ ETS if we don’t,” says DairyNZ chair Jim van der Poel.

“The NZ ETS pricing would be out of farmers control and they would face a broad-based tax. Also, farmers wouldn’t get recognition for on-farm work to reduce emissions. We’re working to get a better deal for farmers while still meeting environmental goals,” he says.

The farm-level levy and processor-level hybrid levy options in the discussion document take a split-gas approach. They acknowledge short-lived gases like methane have a different warming impact to long-lived gases like carbon dioxide, and the price for methane will be separate and delinked from the carbon price.

“We want the framework farmers select to incentivise work underway on-farm including sequestration and riparian planting. The two options would ensure any revenue raised by the pricing system would go back into R&D for innovative solutions and support farmers’ on-farm work to mitigate their warming impact,” says B+LNZ chair Andrew Morrison.

Farmers will have the opportunity to have a say in February when B+LNZ, DairyNZ and Federated Farmers take a nationwide roadshow to the regions.

“We’re releasing the draft discussion document now so farmers have time to consider the options. At the roadshow meetings, we’ll explain what the options mean for different farming systems, and most importantly answer questions and hear farmers’ views,” says Morrison.

A more detailed information pack on the options will be released by the partnership early next year ahead of the roadshow.

“It’s hugely important farmers get involved and tell us what they think in February. We’re committed to finding a solution that works for farmers and keeps the sector in control of where and how it uses funds for the benefit of farmers,” says van der Poel.

He Waka Eke Noa consists of ten primary sector organisations, as well as the Federation of Māori Authorities, the Ministry for Primary Industries and Ministry for the Environment.

The partnership formed in 2019, after the Government proposed legislation to put agriculture into the NZ ETS.  DairyNZ, B+LNZ, Federated Farmers and others negotiated to set up the partnership to identify an alternative that would be fairer, meet environmental objectives and enable farmers to continue running successful businesses.

Feedback from engagement including the February roadshow and farmers’ online feedback will form part of the partnership’s recommendations to the Ministers of Climate Change and Agriculture in late April 2022.

Option 1: Farm-level levy: This would calculate emissions using farm-specific data, and the farm would then pay a price for its net emissions. This option would reward eligible on-farm sequestration additional to that currently included in the ETS that could offset some of the cost of the emissions levy. Any additional revenue raised through the levy above the scheme costs would be invested back into the agricultural sector for further emissions reductions work and research and development.

Option 2: Processor-level hybrid levy: This levy would calculate emissions at the meat, milk, and fertiliser processor level, based on the quantity of product received from farms, or in the case of fertiliser, sold to farms. It would be paid at a processor level, and likely collected by the processor charging through to farmers based on the quantity of product processed, or fertiliser supplied. Farms (individually or in collectives) could choose to enter into an Emissions Management Contract (EMC) to get a payment for reducing emissions and/or for recognising sequestration on-farm.

NZ Emissions Trading Scheme: Within the NZ ETS, agricultural emissions would be calculated at a processor level initially, to create a financial incentive for farms to reduce their emissions. Short-lived gases like methane, and long-lived gases such as carbon dioxide and nitrous oxide, would be treated the same using a carbon equivalence metric (CO2e). Methane emissions would be priced on the prevailing carbon price, multiplied by a factor of 28 to reflect its carbon dioxide equivalence. Costs for farmers would continue to increase each year alongside increases in the carbon price, despite work to reduce emissions.  Also, most on-farm vegetation is not currently recognised in the NZ ETS, e.g. riparian areas, shelter belts and small woodlots, which farmers would not receive recognition for.