Don’t pay too much for cattle – SFF 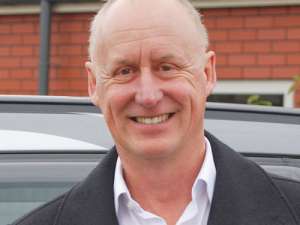 Farmers buying store cattle should be careful not to pay too much, warns Silver Fern Farms chief executive Dean Hamilton.

The meat processor is predicting a mixed outlook for the new season starting on October 1.

“On beef we are at an interesting point. Store stock markets appear overheated, given where we expect volumes and schedules to end up. Current finished cattle schedules reflect a shortage of supply, which is typical at this time of the year,” he told Rural News.

“However, once volumes pick up, and assuming the currency stays at current levels, we believe schedules will retreat to more accurately reflect end-market conditions.”

He says it has been a good 12 to 24 months for beef, with less supply out of Australia and the US, but commentators expected their volumes to pick up later this year, so SFF was “a bit more cautious” about the outlook going into 2018.

“What we’re seeing at the moment is quite a strong store stock market, people at the yards buying cattle and paying high prices. We are signalling a need to be cautious about that, and how we believe the current schedules are likely to go down not up,” Hamilton says.

“Farmers should be careful about their end price expectations when they’re buying these young cattle, because we feel the balance of risk here is on the downside, if Australia and the US do what they say they’re going to do.”

Hamilton says China’s demand is increasing, but not at the pace of that competing supply.

Bobby calf numbers have been down in the past two seasons as dairy farmers retained a lot more bull calves and some heifer calves.

“We expect cattle numbers in the coming season to be similar or slightly up on this season, with some of the retentions out of the dairy herd last year expected to boost bull and even heifer numbers.”

Meanwhile, with mating about to start, Hamilton does not expect to see any “massive change” towards putting beef breeds over dairy herds to minimise bobby numbers.

“Some people talk about putting Wagyu over them. I think that’s very niche, at the end of the day.”

Dairy farmers will do what is right for them for milk production, he says.

“Maybe at $3.50/kgMS they pay a bit more attention to the by-products of their business, but I think at $6.50/kgMS they’re well and truly focussed on maximising the volume of milk. I don’t see them compromising  their herd to create a beef animal out of that.”

Meanwhile, on lamb Silver Fern Farms has had reports of good strong lambings, particularly in the North Island – following a mild winter – with no repeat of the facial eczema of previous seasons and a good spring. Hamilton says the number processed this season could approach 20 million.

“So we could well see volumes up 5% on last year. That would be significant; if prices can hold up with 5% more volume that would make for a good year.

“For lamb, China and US demand is currently strong.

“In October we will head into the European chilled supply season, which should hold up farmgate prices. Once through that, we expect the total return from lamb to decrease given the greater frozen mix. We would normally see a $1.00/kg rule-of-thumb difference in value from the Christmas chilled period to the main part of the season, everything else being equal.”

Hamilton also expects a positive year for venison. Deer and velvet prices were strong so deer farmers were looking to retain their hinds rather than have them processed.

“Supply’s down 25% on what it was two years ago. Demand has started strong in Europe and the US so you’re seeing strong market prices and that’s being reflected in record high payments to farmers. At the moment they are receiving close to $10/kg for their venison. We see those market prices staying relatively strong and it feels like it’s going to be a positive year.”

“We expect venison numbers processed to be similar to the current season at about 280,000 - 300,000 as the national herd continues to slowly rebuild.”

Hamilton says this season will be Silver Fern Farms’ first since the closure of its lamb-processing plant at Fairton, near Ashburton, and the decision to send that volume to its Pareora plant south of Timaru.

“We’re confident we’ve got all our plans in place to do that. It’ll depend obviously on the flow of lambs, but if it does what we expect it to do we have more than enough capacity at Pareora to cope with the Fairton volume.”

The recent announcement by Silver Fern Farms that Richard Young is the new chairman of the meat co-operative got this old mutt thinking this is a true case of ‘poacher turned gamekeeper’.

Profit up, dividend down for Silver Fern Farms

Silver Fern Farms Cooperative has reported a net profit before tax of $2.4m for the 2018 financial year.