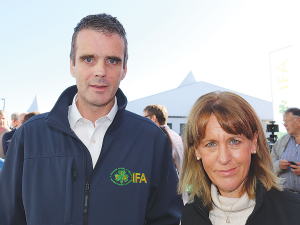 UK and Irish farmers are united in their concern about the way the Brexit negotiations are heading, with a no-deal looking a real possibility.

Every day in the UK and Ireland, Brexit is on the front page of most newspapers. Rural News senior reporter Peter Burke reports from Ireland.

Just last week, leading Irish diplomat Michael Collins was quoted in The Irish Times newspaper as saying the critical border issue between the north and south of Ireland was “blissfully ignored” during the referendum.

But despite the criticism being heaped on him, UK Prime Minister Boris Johnson seems resolute on leaving the EU on October 31.

This has sparked a strong response from the presidents of the Irish Farmers Association and the UK’s National Farmers Union who met at the recent 88th National Ploughing Championships in Co Carlow Ireland. They told Rural News it is very worrying for the farmers they represent.

Minette Batters, of the NFU, says her organisation has been working hard to ensure Prime Minister Boris Johnson understands the challenges of agriculture. She was pleased Johnson came to Dublin for talks with the Irish Prime Minister, Leo Varadkar, despite Varadkar having said after the meeting that there is still a “very wide gap” on Brexit.

Batters hopes that despite this Johnson will better understand the implications of Brexit for agriculture.

“This is getting very dangerous now. It’s now approaching the 11th hour of these negotiations and time is not on our side,” she said.

“Building the Prime Minister’s understanding in the complex area of trade is going to be a challenge. It’s about getting him to commit to an orderly departure and the no-deal has to be taken off the table.”

Batters says the NFU has been working hard, ever since the referendum, to ensure Britain leaves the EU in an orderly manner and maintains free and frictionless access to the EU market. This must be achieved, she insists.

“These are worrying times for farmers in Ireland and England – who I represent – because there is no certainty. There is a crisis in the beef industry in both countries and that is primarily due to the uncertainty Brexit has created,” Batters said.

Irish Framers Association president Joe Healy, who has strong New Zealand connections (he has relatives here), claims certain parts of the Irish agricultural sector could face “armageddon” if Brexit is not sorted out properly. He agrees with Minette Batters that a deal should be worked out that is fair to Irish and UK farmers.

Healy says the challenge for Irish farmers is that the EU is negotiating on their behalf and they have no direct say in the negotiations.

“From an Irish farmer’s point of view we have tried to keep agriculture to the top of the political agenda, be that with the EU’s Brexit negotiator Michel Barnier or other EU leaders,” he said.

“No country has the potential to be as badly affected as Ireland because of our close trading relationships with the UK. For example, 50% of the beef we export goes to the UK so it’s a crucial market not only for Ireland but also for the EU.”

Healy points out that $70 billion of agri food products from the EU go into the UK every year and if, for some reason, that was stopped and these products remained in the EU it would decimate the EU markets.

Healy believes – not unexpectedly – that for NZ, the issue of lamb exports will be a challenge in the present NZ/EU FTA.