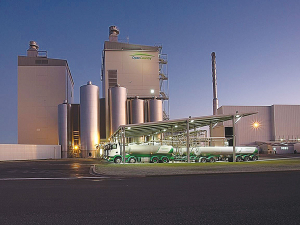 Open Country Dairy says it is investing in green technology at all four plants around NZ.

Open Country Dairy (OCD) has put in a new electrode boiler, the largest of its kind in the southern hemispher, to run its new Awarua spray drier plant in Southland.

Traditionally, dairy factories would look to coal as an energy source. However, OCD has investigated alternatives over the past few years.

"The electrode boiler wasn't the lowest cost option, but we have got a model that works, and our supporting partners have made the option viable," chief executive Steve Koekemoer explains.

"Using a 100% renewable electricity source in Southland to generate steam is a good thing" he told Rural News.

"We aren't aware of an electrode boiler running a spray drier globally, but we've managed to prove that it runs very well. Electricity prices will be a barrier to entry for others but hopefully at some stage in the future we will see many more of these options used in the industry."

Open Country is also converting the two boilers at its Waharoa plant in the Waikato from coal-fired to wood pellets. This process is currently underway and when completed will remove a significant amount of CO2 release to the atmosphere.

Open Country says it has also spent significant capital on a new state of the art wastewater treatment plant at the Waharoa plant. As a result, the treated water, which is now discharged farmland or waterways, is virtually at drinking water standard.

"It is truly an impressive plant and we have once again broken from tradition to design and use technology that futureproofs our business," Koekemoer says. "We are focusing on delivering an outstanding result for both the environment and community."

At the Awarua plant, a new water recycling system means the plant now has the capability to reuse water evaporated from milk and make the site self-sufficient throughout most of the year.

Koekemoer says OCD and other milk processors have been quietly investing big on sustainability in recent years.

"Other processors are going down a similar path and sometimes this story isn't told as well as it should be," he adds. "The NZ dairy industry is doing a lot of work on sustainability, which is impressive to see."

Koekemoer says this bodes well for the industry and means a strong future for dairy out of NZ.

"I think NZ is on the road to becoming a centre for excellence in dairy processing," he says.

Open Country Dairy suppliers are in for another record milk price next month.