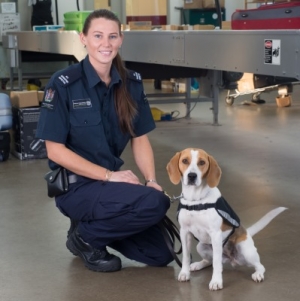 A BIOSECURITY dog has started her sniffing career in style – her detection work resulting in a Vietnamese air passenger being denied entry to New Zealand and later sent home.

New Ministry for Primary Industries (MPI) detector dog Clara (pictured with handler Lucy Telfar), who only started work last week, sniffed out plant material in a bag and a suitcase carried by the passenger on Thursday at Auckland International Airport.

The passenger had not declared any food materials on her arrival card.

Further investigation of the passenger's baggage revealed food packages that appeared to have been opened and repacked with biosecurity risk goods.

"There were seeds in a milk container. Other packages contained risk items such as home-produced pulled pork, pork floss, dried plants with insect damage, fresh leaves, and rooted cuttings.

"The items posed high risk to a wide range of New Zealand primary industries. For example, the homemade pork products could have been carrying foot and mouth disease.

"We believe the passenger's action was a deliberate attempt to smuggle dangerous goods into New Zealand."

As a result of Clara's good work, immigration officials refused the woman permission to enter the country. She was sent back to Vietnam on Friday.

Hickman says MPI currently has more than 35 dog teams working at airports and ports around the country to sniff out biosecurity items.