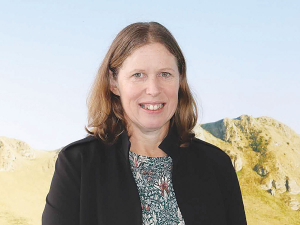 Prices and demand from China had been strong for some time, but harvest rates were also high from the surge in plantings in the 1990s.

Then came the northern summer when Chinese building activity falls off because it’s too hot, and suddenly logs weren’t leaving the ports, she said.

Kilsby says the trading mentality in China seemed to be “if my fellow trader is buying then I should buy”, with less sense of the big picture, giving rise to periods of oversupply and sharp corrections.

But prices now seem to have stabilised. “We may see some gradual recovery but it’s going to take a little while,” she said.

Speaking a couple of days before the Reserve Bank cut the official cash rate in early August, Kilsby said everyone was expecting a cut, but the question was how many more cuts will follow.

The economy was “chugging along” but not booming, she said.

“We at ANZ have a slightly differing view to the Reserve Bank as to how quickly our economy will pick up. We think the path is going to bee a little bit longer.”

Kilsby referred to the slowdown in economic growth in a lot of our trading partners, particularly in Europe. Germany is “chugging along” just above recession levels, while the UK was “not too flash” with the uncertainty of Brexit”. But Asian markets are still growing rapidly and NZ is well aligned to some of those markets.

A rapid lift in nearly all export products to China -- most markedly beef, lamb and mutton -- is driven by their shortage of protein due to the Asian swine flu epidemic.

Kilsby says many beef restaurants are opening in China, citing her own recent experience at a restaurant offering tail, neck and belly rather than the usual recognised premium cuts.

“The way they cook it all tastes amazingly good anyway. I think we may have [been served] tail because it came out with a lot of bone and not much meat.”

She says that China’s valuing of cuts which other markets do not value is a welcome trend at a critical time: NZ has been relying on selling into the US hamburger pattie market where consumers may now be just as happy to buy product made from other protein or grown in a lab.

The lamb market is also performing strongly, again partly due to the price for the poorer cuts, driven by strong demand from China.

“If you can get $150 for your cull ewe that’s quite different from where things were a few years back.”

Kilsby says ANZ is also “reasonably bullish” on dairy, largely because the world’s milk production is not huge.

US production is growing about 0.5% and Europe would be lucky if it were growing by 1%. Australia, Argentina and Uruguay are all going backwards.

“So we are a bit more bullish than Fonterra’s midpoint but are certainly within that range,” said Kilsby.

Give us ethical food

Meanwhile, Kilsby says the big coming trend is the demand by consumers that food and other products be ethically produced.

She says millennials often buy second-hand clothes rather than new if new don’t fit their values.

Kilsby believes farmers will have to communicate what they’re doing on farm via data now collected by, say, processors’ farm assurance programmes and farm environment plans. This data is, and will be, linked through the supply chain to tell consumers about product origins.

“This is where we are going to see value-add,” she says. “We’re going have to accept that different farmers will be paid different prices for their products based on how well they do some of these things.

“What we do on farm is going to become the new value-add, but it will have to be supported with data and with stories that resound with people, and [so motivate people] to pay more for product and feel good about what they’re consuming.”