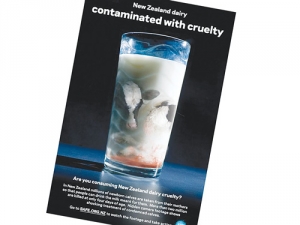 SAFE has criticised the dairy industry via its highly publicised campaigns targeting mistreatment of bobby calves.

Dirty tricks played on the farming sector by an animal rights lobby could cost the group its charitable status.

SAFE has criticised the dairy industry via its highly publicised campaigns targeting mistreatment of bobby calves.

Last year, it published a scathing ad in UK newspaper The Guardian, describing the "shocking treatment" of calves in the New Zealand dairy industry.

In response, outraged farmers described the campaign as "emotional scaremongering" and said it was an attempt to undermine NZ's economy.

The petition has been presented to the Department of Internal Affairs and is being treated as a formal complaint, which could lead to its status being reviewed. A spokeswoman said the department had requested information from SAFE about its current activities.

Lowry said she was sick of SAFE's "slander against dairy farmers", which she said unfairly portrayed them as cruel.

She claims the lobby did not use funds to educate the public, as required to maintain its charitable status, she said.

SAFE's most recent financial reports show virtually all its funding -- just over $1 million – comes from donations. If its charitable status was revoked, it would have to pay tax on its donations.

SAFE executive director Hans Kriek says the claims were unfounded and he was not worried about losing charitable status.