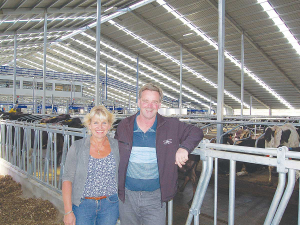 Aad and Wilma van Leeuwen say four years on from being hit by M. bovis they are still fighting MPI for compensation, which runs into millions of dollars.

South Canterbury farmers Aad and Wilma van Leeuwen say, four years on, they are still fighting the Ministry for Primary Industries (MPI) for compensation, running into millions of dollars.

An arbitrator has been appointed to rule on their compensation claim in August/September, after months of meetings and assessments by both parties.

The Van Leeuwen Group, which was placed into receivership with many of its farms sold earlier this year, had to cull about 4,000 animals since first reporting M. bovis on one of their farms in south Timaru.

Aad van Leeuwen told Rural News that MPI's handling of M. bovis on his farms was appalling and has left them millions of dollars out of pocket.

"We did the right thing by notifying the disease on our farm, yet four years on we are still fighting for our compensation."

After notifying MPI of M. bovis, the Van Leeuwen Group was ditched by its trading bank and had to make other more expensive financial arrangements.

Van Leeuwen says he felt MPI wasn't prepared to deal with farmers impacted by the disease.

"I felt they were learning on the job at our expense; we were being used as guinea pigs to the detriment of our business."

He gives an example where MPI insisted on one occasion that his cows must go to a particular meat works to be culled.

"This particular meat works was paying us much lower than what our meat works would pay us - a difference of about $800,000," he told Rural News. "MPI's excuse was that it could be claimed under compensation, which was taxpayer money anyway. It was only after we threatened to go to the media about wasting taxpayer money that MPI relented."

Van Leeuwen says a recent University of Otago report on the impact on MPI's handling of M. bovis is "on the mark".

"A lot of what they talked about is true but it's just the tip of the iceberg," he says.

"On our farm, MPI spend $100,000 emptying an effluent pond and there were guys sitting in the milk sheds, with toothbrushes cleaning our water connections and being paid $40 an hour," he adds.

"It was sheer stupidity. One of our sharemilkers went into a cordoned off area to turn off a running water hose that MPI had left on after 5pm. Someone dobbed him in and he was taken to a hotel room in Timaru and was subjected to a police-style interrogation by MPI officials.

Van Leeuwen has also taken aim at Agriculture Minister Damien O'Connor, saying he has failed to look after the interests of farmers.

"I feel the minister is sitting on his hands and not doing enough for the rural community he represents," van Leeuwen claims.

"We are not asking for any special attention as the Biosecurity Act states that an affected party should be no worse off and no better off. We notified the disease yet we are still fighting for what we rightfully deserve."