Another fruit fly discovery in Auckland 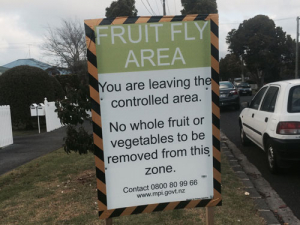 A second type of fruit fly has been found in a surveillance trap in the Auckland suburb of Otara.

The Bactrocera facialis - the “facialis fruit fly” discovered is a different species to the Queensland fruit fly and the detection is not related to the current Devonport situation.

The solitary male fly was formally identified late on Monday. No further facialis fruit flies have been found and at this stage there is no indication there is an incursion of facialis here.

Ministry for Primary Industries Director General Ray Smith says facialis is native to Tonga where it badly affects crops of capsicum and chilli, but appears to be less harmful to other fruit and vegetables. It is a tropical fruit fly species so New Zealand’s climate may not provide an ideal home for it.

“As with the fruit fly in Devonport, we need to determine if it’s a lone specimen or if there’s a population of these flies in the area.

“To do this, we’re setting more traps in the area around the find. And while we look for more flies, we have restricted the movement of fruit and vegetables to stop the spread of any other facialis fruit flies that may be out there,” Mr Smith says.

“We are progressively ramping-up activities in the area and will be working closely with the local community.”

Biosecurity New Zealand (a division of MPI) has declared a Controlled Area around the location where the facialis fly was trapped. Residents in the Otara area can find full information about what they need to do at: www.biosecurity.govt.nz/fruitfly

The restrictions are the same as with the Devonport Queensland fruit fly - whole fresh fruit and vegetables (except for leafy vegetables and root vegetables) cannot be moved outside of the A Zone of the Controlled Area. This is the area that extends 200m out from where the fly was found. Home-grown vegetables cannot be moved out of a wider B Zone.

Detailed maps of the controlled area and a full description of the boundaries, and full information about the rules are at www.biosecurity.govt.nz/fruitfly

If local people believe they have seen signs of this fruit fly or found larvae (like white grains of rice) in fruit, they should call the response team on 0800 80 99 66.

Smith says if there are no further detections, the operation is expected to last two to three weeks.

Field crews are busy today setting up a field HQ and placing traps. Work will proceed in the next couple of days installing road signs and distributing other information materials to the public.

Biosecurity New Zealand has commenced an investigation into how the fruit flies have entered the country.

Smith says the separate and unrelated Otara and Devonport detections are evidence of the value of a multi-layered biosecurity system.

“Our border controls are extremely tight and effective and they are backed up by an active surveillance system. With these latest two detections that system has put us in the best possible position to respond quickly and ensure New Zealand remains free of these pests.

“That said, it is important we continue to learn and evolve our biosecurity system.  A review of our cargo pathway was initiated in January and is underway. I have now asked Biosecurity New Zealand to commission an independent assessment of the air passenger and cruise pathways.”