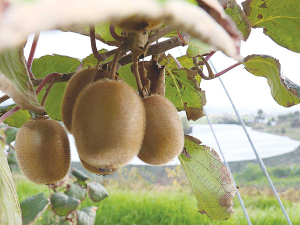 Along the east coast, maize has been a crop grown by Māori but now kiwifruit and other high value crops are starting to appear.

While Te Kaha may be a hub, other trusts and incorporations are also taking the plunge and moving into kiwifruit. Drive from Opotiki right up to Te Araroa near Hicks Bay, and you will see a mix of large and small kiwifruit orchards tucked away on the coastal flats and rolling hillsides - many of them covered.

In many cases, Māori trusts are incorporating kiwifruit into their overall operations. For example, Tunapahore B2A Incorporation at Hawai has 5ha of kiwifruit alongside its 385-cow dairy farm.

Along the east coast, maize has been a crop grown by Māori or by others on land leased to them by Māori. But now kiwifruit and other high values crops are starting to appear, says Anaru Timutimu.

"It's daylight between the type of returns you were getting," he told Rural News. "In the case of maize, you might get $1,500 per hectare, but fully developed orchards can now attain gross returns of $200,000 plus per hectare."

Timutimu says this means more jobs for young Māori and a cash injection for whanau and the local economy.

"There is a distinct advantage in Te Kaha with their mild micro climate, which means their fruit matures earlier than other regions, attracting a premium price for early start," he says.

This change is also being observed by Peter Andrew, a director of AgFirst - based in Gisborne. He says there is a lot of change taking place around the whole East Coast, with some farmland being converted to forests, but he's also noticed a big shift to horticulture.

Andrew says Māori are not that keen on forestry given the bad experiences they have had; horticulture seems to have more appeal. He says there is a lot more horticultural development around Gisborn itself with high value crops such as kiwifruit and apples pushing crops like maize to less productive land.

He is also noticing Māori diversifying their land use. He says there is a significant blueberry operation at Tolaga Bay.

Andrew believes the other advantage with horticulture is that it is often better use of water because it is being used on high value crops.

Zespri says it has had a record season, with its global fruit sales revenue exceeding $4 billion for the first time.