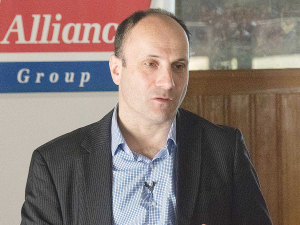 Alliance Group chief executive David Surveyor says the co-op has been in “ongoing discussions” with the Ministry of Social Development over the application of the wage subsidy.

Self-proclaimed ‘political operative’ Simon Lusk is taking the Alliance Group to court in a bid to force the meat company to pay back the wage subsidy it claimed during the Covid lockdown earlier in the year.

“Alliance Group’s failure to completely repay the wage subsidy is disgraceful,” Lusk said in a recent post on the Kiwiblog website.

He claims the wage subsidy was only for companies that had an actual or projected fall in revenue of more than 30%.

“This was necessary to support those businesses that were forced to shut down or alter their business practices substantially during the Covid lockdown in the autumn,” Lusk says.

“Alliance Group appears not to fit this criteria. They were an essential service that continued to operate during the lockdown.”

Lusk on his own website describes himself as “one of the very few professional campaigners in New Zealand”. He also claims to run campaigns for local government, central government, party selections and “specialises in third party campaigns”.

Lusk claims that Alliance paying back some of its subsidy is “incomprehensible”. The farmer-owned cooperative has returned $17m of the $34.3 million it claimed wage subsidy.

Alliance chief executive David Surveyor says that throughout the process, they have been in “ongoing discussions” with the Ministry of Social Development over the application of the wage subsidy.

“We said at the outset we would return any funds not used to pay people and can confirm we have since returned $17 million of the wage subsidy.”

“That is why I have sought leave of the court to bring a private prosecution against the non-executive directors of Alliance Group. I want an impartial adjudication of Alliance’s actions, on the public record and for all to see.”

Lusk says he wants the courts to adjudicate.

“Let directors of Alliance front up in court and put on the public record their justification for retaining any part of the wage subsidy.”

Back in June, when criticism of meat companies taking the wage subsidy was first raised, it was labelled “ill-informed and stupid” by the union.

National secretary of the NZ Meatworkers Union Daryl Carran told Rural News that the wage subsidy was a ‘no brainer’. He said it meant many millions of dollars paid out to workers and their families during the crisis.

“Without it, hundreds even thousands of meat workers would have been laid off, swelling the queues at foodbanks and WINZ offices around the country,” Carran told Rural News.

“It was absolutely crucial to the industry’s future that these people are retained in the sector.”

Carran said the union worked closely with meat companies and the Meat Industry Association when preparing their applications for the subsidy.

“Without [the subsidy] these people would have been given early season termination notices and ended up on the dole, which many would not have qualified for if they had a spouse who works as well.”