Agriculture needs to adapt or die 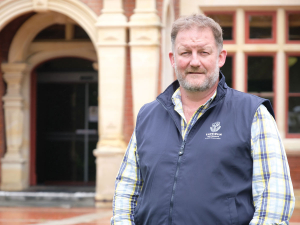 Hamish Gow says firms shouldn’t be sitting back and complaining about Covid but adapting their businesses to deal with it.

He says a lot of firms have used the pandemic as a positive opportunity and have been very successful in driving change within their firms, their value chains, and their industry.

"Then there's other ones who have sat back and said, 'We don't need to change, this will all be over'," Gow told Rural News. "And we're now into our third season and they're still trying to run everything the same way, complaining that they can't, for example, find workers.

"But they haven't done anything to change and they're in the same situation that they were at the start of the pandemic."

Gow says some firms, such as Fonterra and Zespri, have done good work securing their supply chains, but others haven't and are now struggling to get container space to move their product around.

He also believes there's a similar challenge in the labour market.

"We've used this previously abundant supply of backpackers and holiday work visas and immigrants to fill holes, as opposed to saying, 'Well, how do we invest in and develop our own people?'

"Now that's changed. There's been a massive change in the way that we think about labour and we've moved away from them being labour units to employees that we invest in, as opposed to just hourly labour units."

Gow says firms shouldn't be sitting back and complaining about Covid but adapting their businesses to deal with it.

"We won't wake up tomorrow or next year and find it's all gone away. We are living in the new normal."

For Gow, the appointment closes a circle begun with his undergraduate studies at Lincoln in the 1980s. His career included about 20 years in the USA, primarily at Michigan State, University of Illinois and Cornell, and several years in Europe. With extensive research and industry experience in agribusiness innovation, strategy, and market analysis, he led market development projects in over 50 countries and consulted to the European Commission, OECD, IFAD, USDA, USAID, UNIDO, FAO, World Bank, and numerous multinationals, farmers' organisations, and governments.

On his return to New Zealand, he spent 10 years at Professor of Agribusiness at Massey University.

He was also recently appointed to the Fonterra Milk Price Panel as the inaugural independent member nominated by the Minister of Agriculture, as established by last year's DIRA review.

Gow says he has been "riding the wave of market liberalisation around the world" since the 80s, including stints in Eastern Europe, Latin America, Africa and Southern Asia.

"All of that time, I've been helping farmers and producer groups, and corporates link to local, regional and international markets, and building new value chains and new business models."

He says his role at Lincoln is to create programmes that can help students understand international markets and develop the competencies to support New Zealand agriculture internationally.

It continues similar work he was doing at Massey, some in collaboration between the two universities.

"So, a lot of that is not going to change, but what the chair has allowed me to do, is to really focus on that as my primary role. Previously I've been in teaching roles, which are not directly aligned to driving and supporting the drive of this change in New Zealand."

Riding The Wave of Trade Liberalisation

Hamish Gow says that up to the 1980s, New Zealand agriculture was very much volume-based and highly regulated.

Then came deregulation and the transition to a value-driven, whole market economy.

"Farmers were already entrepreneurial. But their focus became very much about creating economic value and self-determination of their individual and collective outcomes," he explains. "We became very focused and extremely good at what we do."

However, Gow believes the challenge now is the transition from value into a world of values - plural.

It's no longer just a single economic dimension but "a multi-dimensional optimization problem" in that global consumers are concerned about environment, people, modern slavery issues, and well-being.

"All of these new dimensions are now being added into the value proposition that we are providing to consumers globally and also in New Zealand."

He believes that farmers will have to work within a new framework, both domestically to ensure they keep their social license to operate and internationally to achieve the market premiums that we want.

"We're going to need to create new business models, and new accreditation mechanisms that prove the attributes that we're providing."

Gow says the other big challenge is New Zealand's separation from its consumers.

"We are unique in that we're the only developed country in the world which sells the majority of what we produce to other markets in the world and we're dislocated from those markets.

"Not just geographically, but also ethnically, culturally, historically - on a whole range of different dimensions," he explains.

"And it's particularly difficult when you start doing that within a Covid-19 environment."

Gow says there is increasing success happening around with the likes of Rockit apples and First Light Foods' Wagyu beef, where producers own the intellectual property so they can ensure they never oversupply and discount themselves and so maintain a premium in the marketplace.

He believes there are also some interesting collaborative models being developed, such as taking New Zealand IP and technology to farmers in other countries - so as to maintain some control while putting our varieties on their shelves year-round.