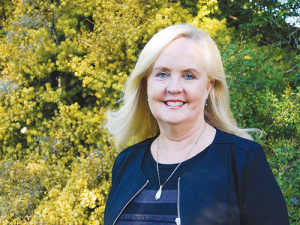 Toni Laming, the recently-appointed chief executive of the Lincoln Hub.

The Hub, or He Puna Karikari, brings several agricultural research and commercial entities together, to collaborate on basic and applied agricultural science.

It has five founding shareholders – Lincoln University, AgResearch, Landcare Research, Plant & Food Research and DairyNZ – and expects to attract others as it grows and develops.

Laming, in the job since March, says she took it on for the great opportunity to make a difference for New Zealand’s primary industries.

Several projects are already in the pipeline, said Laming at the Hub’s temporary premises, the converted foyer of a building at the sprawling Canterbury Agricultural and Science Centre at Lincoln.

But she revealed frustration that previous media coverage of the Hub project had concentrated on the proposed $206 million stage 1 building planned by partners AgResearch and Lincoln University for completion by late 2019.

While that building is intended to house staff from various organisations – in line with the Hub’s collaborative model – Laming emphasises that it will be only one building in a wider redevelopment. The Hub’s own staff might never be housed there.

She says the Hub is already working in its role as “facilitator and connector”, pulling together bespoke teams of scientists from various organisations, for specific projects.

“We’re essentially a front door to organisations saying ‘we want to solve this’,” Laming says.

“We look across the science system and our five shareholders, and ask, ‘what’s the best team we can put on that, to make that work’?”

Laming says the Hub acts as “almost an outsourced R&D provider”. There is a “huge amount” of interest offshore to come and access NZ’s innovation system, she says.

“There are very few places in the world where you can access everybody -- from the consumer to the farmer to the regulator to the government to the whole supply chain -- and innovate and develop your system in a safe country.”

Laming says NZ is “a pragmatic country” where it is easy to do business and has an innovative edge.

Raised in a farming family in South Africa and with a degree in applied chemistry, Laming comes to Lincoln with 25 years experience as an executive in global companies, including Australian mining giant Orica and Fonterra, where she managed international strategies.

She was inspired to take on the Lincoln Hub role partly because of her time at Fonterra, where “you can see that [Fonterra supplier] number at the end of the gate and know that what you do is contributing straight back to NZ farmers”.

She says NZ is a high adopter and user of technology.

“So what’s it going to take? What kind of technology is useful and how do we support the development of usable technology that allows farmers to manage their licence to operate, work productively and work efficiently?”